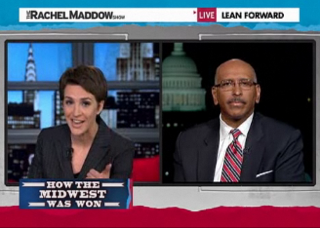 The initially Wisconsin-centric, now pan-Midwest union debate in many ways gets at the core of what divides left- and right-wing ideologies: what money should be allocated to and who deserves the most help. It was to this core concern that Rachel Maddow spoke to on her program this Friday, and for that she brought on board a worthy opponent: former RNC chair Michael Steele.

Maddow and Steele had plenty of territory to cover– the union battles involving governors Scott Walker, John Kasich, Mitch Daniels, and the newly trending judicial election between Sarah Palin favorite David Prosser and his liberally-backed opponent Joanne Kroppenberg. But rather than specifics, the two quickly ended up falling along ideological lines over how much to spend and cut over what issues and programs.

For Steele, the union issue was not, as Maddow initially argued, taking down unions for the sake of taking down unions. “The driving force is the contracts,” Steele noted, suggesting that the GOP had not done an efficient enough job of pointing out the major budget considerations that were at stake. Making the issue about the budget and not unions, Maddow responded, made her “very excited.” “If this is a budget issue… how to they [Republicans] explain having responded to a budget problem by giving away hundreds of millions of dollars in state revenue… to business?”

“Well,” Steele countered, that highlighted “the philosophical difference between where you sit and I sit.” To Steele, “the wealthy that is created by the small businesses is not giving away [money],” but, rather, stimulating the fragile private sector. But Maddow returned to her belief that “you can’t be a deficit hawk who wants to give away the revenue to the businesses, even if you have a beautiful Ayn Randian conception of what those businesses will do with all that money.” Steele responded with a laugh, and a denial that Maddow’s characterization of tax breaks as gifts was accurate.

O the judicial point, both Maddow and Steele agreed that less political involvement in the judiciary was better for the country, which put Steele once again at odds with Sarah Palin, who recently endorsed Prosser on Twitter. “The national yin and yang is going to come baring down,” Steele noted, with a hint of dismay about it. “I generally have a problem with getting our judges and having them submitted to the political process.” Maddow agreed.

One surprise to come from Steele’s post-RNC career is just how well he seems to get along with Maddow, and just how much the pair make for great TV. They clearly disagree on nearly every point, they bicker over their core philosophies knowing that neither will convince the other, but the debate comes off as all in good spirits and with no tension over it whatsoever, almost a feel-good relief moment in a cable news world defined by mutual stress and distrust.