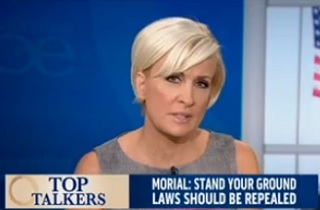 The conservative smear that President Obama, as State Senator Barack Obama (D-Illinois), supported a Stand Your Ground law has made the species jump into the mainstream media with an assist from MSNBC’s Mika Brzezinski, the ostensible counterweight to conservative Morning Joe host Joe Scarborough. On Tuesday morning, Brzezinski credulously read a Wall Street Journal piece that tried to paint the President’s Friday remarks about Stand Your Ground as a reversal, and as usual, there was no one around to call bullsh*t.

Noting that this is “pretty important, given the grand scheme of the conversation,” Brzezinski dutifully read from the WSJ piece, which uses weasel words and sleight of hand to conclude that then-State Senator Obama “participated” in an “examination” of Illinois’ self-defense law. and “emerged as a Stand Your Ground proponent.”

Brzezinski also parroted another sick conservative talking point, that “minorities, in some ways, have been on the benefiting side of Stand Your Ground” in Florida, but that’s a whole different can of worms. Host Joe Scarborough followed Brzezinski’s recitation by wishing that the President would explain “why he supported the Stand Your Ground laws in 2004.”

That Wall Street Journal piece is based on a blog post from the conservative Illinois Review, which has swept through conservative media like Activia with Bran Clusters. That original post was actually an almost-fair reading of the situation, which then got oversold, and eventually distorted into a smear:

The Obama-sponsored bill (SB 2386) enlarged the state’s 1961 law by shielding the person who was attacked from being sued in civil court by perpetrators or their estates when a “stand your ground” defense is used in protecting his or her person, dwelling or other property.

I say “almost fair” because even Illinois Review’s take relies on a pair of false premises, the first of which is that the bill that Obama supported specifically dealt with “Stand Your Ground” claims. It did not. The bill revised the law for all self-defense claims. Illinois Review’s assertion is like saying that because the President likes baseball, he’s a Cubs fan.

But worse than that, Illinois doesn’t have a “Stand Your Ground” law like Florida’s, at least not according to this map: 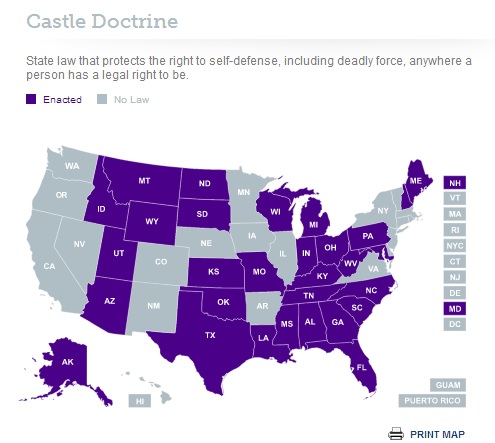 Illinois’ self-defense law does have one thing in common with Florida, which is the absence of a duty to retreat, but there are significant differences as well. From The Chicago Daily Law Bulletin‘s Shaun Zinck:

(Associate director for administration at the State’s Attorneys Appellate Prosecutor’s Office Matthew P.) Jones said in Illinois, the force used to defend must be proportional to the danger they face.

“It makes one who claims justified use of force immune from not only conviction, but also arrest and charging,” Norton said.

Jones said Illinois has an affirmative defense, which means if a defendant claims self-defense after killing someone, they must prove that the danger they faced justified using deadly force. That burden shifts to the prosecution in Florida, he said.

Technically speaking, Illinois’ law can be described as “Stand Your Ground” by virtue of the “no duty to retreat,” but the additional burdens it imposes make it entirely consistent with President Obama’s remarks, which specifically referenced the use of deadly force against an unarmed victim. Illinois Review does make the entirely fair point that, with regard to the existing law’s absence of a duty to retreat, Obama “didn’t raise” the issue of “whether the laws encouraged altercations rather than avoiding them,” but the criteria for self-defense were not part of the bill, and were not discussed by anyone.

In any case, revising a law that includes Stand Your Ground-Lite in no way makes you a “proponent” of such laws, any more than a Republican offering an amendment to an abortion law makes them an “abortion proponent.”

I expect to hear a smear like this repeated on conservative outlets, but on a supposedly liberal network, from the supposed counterweight to the network’s prominent conservative host? No one at any network should be Leaning Forward into this garbage.