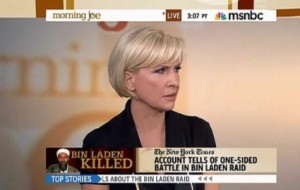 Halperin correctly observes that, in their haste to get the story out, the White House has created a problem where one didn’t need to exist. However, a significant delay in releasing details would surely have raised more suspicion, so the question really ought to be whether it was even possible to get everything right, so quickly.

Where Halperin might be wrong is in saying that the raid is “controversial,” at least to people who aren’t compulsive rabble-rouser Michael Moore. If it somehow becomes controversial, then we obviously aren’t doing our jobs, and Brzezinski’s question perfectly illustrates that:

Early in the segment, NBC Chief Pentagon Correspondent Jim Miklaszewski presented the most up-to-date official timeline of the raid, taking care to note that even the unarmed subjects could very well have been been concealing explosives. Throughout the discussion, the panelists (including Halperin) were careful to note that their questioning of the official story should in no way be seen as diminishing the actions of that SEAL team. Halperin even suggests that this should not be cause to question the patriotism of journalists.

Harold Ford, Jr, points out that, intentions aside, the swirl of questions and contradictions does “cast a shadow” over the operation, and while much of the blame for that is being placed (somewhat fairly) at The White House’s feet, the length and breadth of that shadow will depend largely on how the media handles it.

Part of the problem for people like Michael Moore (aside from an innate skepticism of the military that, in the right measure, is healthy) is that our news media is ill-equipped to counter the impression that “unarmed man” headlines give, that this is somehow analogous to a hinky police shooting. It is difficult to convey the proper context in a headline, or to lay out the differences between the civilian frame of reference, and the specific challenges of a military raid on a target predisposed to blowing himself up along with his would-be captors. Whether bin Laden was “reaching” or not, he posed a danger, especially if he didn’t immediately enter the correct surrender posture.

Halperin is right, there is absolutely nothing wrong with asking questions, and the White House could definitely have given better answers, but we have a duty to present those answers in proper context. If we do that, then this will only be “controversial” to the willfully ignorant, like Michael Moore. Calling the bin Laden shooting an “execution,” based on zero evidence, is a smear on the men who conducted the raid, and on President Obama.