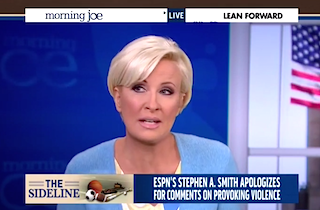 Whoopi Goldberg may have gotten some serious pushback from her co-hosts on The View yesterday when she defended ESPN’s Stephen A. Smith’s controversial comments about domestic violence. But she got some unexpected support from Morning Joe’s Mika Brzezinski, who said Tuesday that Goldberg’s words on the matter “had value.”

The whole thing started after the NFL decided to suspend Baltimore Ravens running back Ray Rice for just two games after he was arrested for allegedly assaulting his wife. In response, ESPN commentator Smith advised women not to do anything to “provoke” violence against them from their husbands. He later apologized, calling his comments the “most egregious error of my career.”

On Monday, Goldberg told women they cannot be “surprised” if they decide to hit their husband and that husband decides to hit them back.

“Wow,” Brzezinski said after viewing that clip on Morning Joe, predicting that this topic could “devolve into a really bad conversation.” She commended Smith for his apology, saying “completely outweighs what exactly he said.”

While Brzezinski said there is an “unequivocal truth” that “men cannot hit women,” she added, “I do think that what Whoopi said had value too.” Like Goldberg, she defended Smith, who she said was just trying to have a “constructive conversation” about the issue.

The various men seated at the table with Brzezinski, which notably did not include Joe Scarborough, were extremely hesitant to defend Smith in any way, summed up by the words, “you just don’t hit a woman, period.”