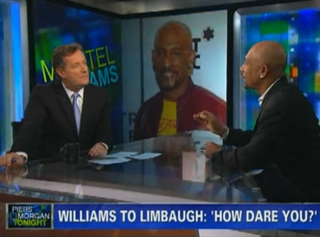 Piers Morgan‘s guest last night, TV host Montel Williams, isn’t particularly known for his political stances, but on Morgan’s show last night, Williams was brimming with opinions on everything from Rush Limbaugh to Republican calls to war, calling into question anyone not having done military service having “the nerve to send our children to die.”

RELATED: Limbaugh: ‘The Left Is Suffering From Shell Shock’ Because White House’s Fluke Plan Is Failing

“I don’t know if there’s an apology that is great enough,” Williams told Morgan in response to a question about Limbaugh’s comments that Sandra Fluke, a law student, was “a slut and a prostitute.” “I have three daughters,” Williams explained, and while he would attack people for their politics, “I am never going after a person’s soul– that was someone’s child, how dare you?”

Morgan did not explicitly condemn Limbaugh’s comments as he has in the past many times, but instead highlighted his shock as a foreigner that such language occurred in America. “What I found extraordinary,” Morgan explained, was “for a guy of that experience, that popularity, to just calmly call any woman a slut and a prostitute– I found absolutely breathtaking.” He made the argument (which some Americans might look askance at) that the “American right to free speech has been abused so much” that people speak without noting “it should go hand in hand with tolerance.”

The conversation shifted gears as Williams argued that the language was a symptom of a larger problem– that Americans “decided we all need to be against each other.”I did 22 years in the military, I was willing to take a bullet for anybody in this country, period,” he told Morgan, arguing that the bottom line for him was that “neither of the Republicans running ever put a uniform on” (neither has President Obama, but he didn’t come up). He notes that at the end of the day, if a new war does spring up, “it won’t be Santorum’s child, it won’t be Romney’s child” who dies. Morgan asks, finally, what the military service taught him about the way Americans treat their soldiers. Williams responds, “thank you for your service isn’t enough.”