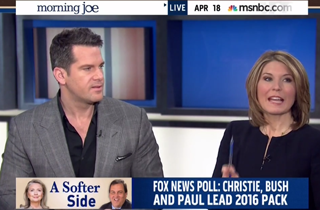 Admittedly, the Republican party will pick their presidential candidates by determining who can best beat Hillary Clinton, but on today’s edition of Morning Joe, the panelists adamantly declared that the media was also important, because they do that thing they’re supposed to do: investigate the background of the candidates. And by doggedly chasing Bridgegate, they may have actually helped Chris Christie prepare himself for the rigors of campaigning — probably because he just resuscitated his political career by declaring he was pro-life “after [children] get out of the womb.”

Former Bush official and McCain campaign advisor Nicole Wallace argued this morning that, if he survived Bridgegate, Christie would be completely prepared to survive more intense and invasive vetting by the media. “You can describe it to someone like a Sarah Palin or newcomer, but you can’t explain it to anyone in terms they can actually understand. I mean, it is the most intense, the most invasive scrutiny. Running for President is just so unappealing to so many people because the scrutiny not just of your own party’s primary, but all wings of the media.”

But John Heilemann of New York warned that being prepared for scrutiny wouldn’t mean much:

“In 2012, David Axelrod and the Obama campaign pointed out about Mitt Romney was [that he was] a potentially attractive candidate who would have to pay a heavy toll to make it through the process. If they got the nomination, they would get out on the other side with a lot of baggage. that turned out to be totally true in are Romney’s case…The question for Governor [Jeb] Bush and Governor Christie, put aside everything in their lives, is what toll will they have to pay?”

We look forward to the media doing their jobs.