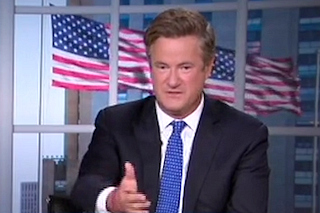 “I need to be very careful about what I’m going to say here,” Scarborough continued. “Ted Cruz comes in obviously so completely ignorant about the war that Tom Coburn has been fighting for twenty years, and to say something like this about Tom Coburn—Ted Cruz, he is a total train wreck. He is comparing Mitch McConnell to Barack Obama. He is attacking Tom Coburn as being a member of the surrender caucus, when Tom Coburn—and yes, Senator Cruz, and I—put our political lives on the line more in six months than Ted Cruz will put his on the line in a lifetime.”

“If I were Ted Cruz, I would be extremely cautious about getting into the ring with Tom Coburn,” Mike Barnicle said. “Ted Cruz would end up being Kid Candle in that fight. One blow, and he will be out against Tom Coburn.”