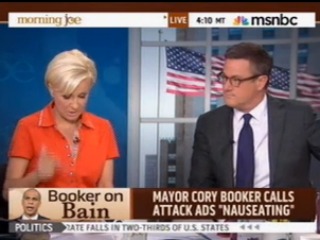 On Monday, the folks at Morning Joe had a laugh over Newark mayor Cory Booker‘s recent Meet the Press comments — and his subsequent backtracking video — over “both sides'” focus on what he referred to as “nauseating” “crap.”

Here’s what Booker had originally said on Meet the Press:

This kind of stuff is nauseating to me on both sides. It’s nauseating to the American public. Enough is enough. Stop attacking private equity, stop attacking Jeremiah Wright. This stuff has got to stop, because what it does is it undermines, to me, what this country should be focused on. It’s a distraction from the real issues. It’s either going to be a small campaign about this crap, or it’s going to be a big campaign, in my opinion, that the American public cares about.

Booker later issued a “backtrack,” of sorts, in a follow-up video. “Stuck to his guns even on YouTube,” host Joe Scarborough joked after having called the Mayor’s original comments courageous. “That takes guts.”

Scarborough and the show’s panelists then observed that Booker’s YouTube response resembled nothing so much as “a hostage video.”

“And by the way, Richard Haass,” noted Scarborough, “most Democrats that fund the party agree with Cory Booker and not with Barack Obama.”

“And by the way, Jon Meacham,” Scarborough continued, “I know this will shock a lot of people, but when Bain Capital invests wisely, it helps Bain Capital. It also helps teachers’ unions, it also helps public employee unions, it helps firefighters. I mean, Bain Capital makes their money by public unions investing in them. These big — whether California or New Jersey — and when they invest wisely, guess what? It’s public unions and private investors who profit.”

He later joked that Booker had misinterpreted threats to “cut his head off,” poking fun at the fact that his video was framed oddly, cutting off the top part of his head.