MSNBC Guest to Chris Matthews: ‘I Don’t Know Why You Had Me on the Show’
VIDEO

MSNBC Guest to Chris Matthews: ‘I Don’t Know Why You Had Me on the Show’ 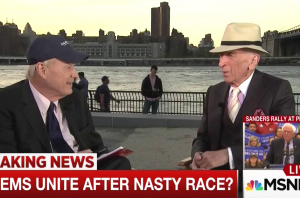 A guest on MSNBC’s Harball with Chris Matthews Tuesday night asked why he was even on the show, since he knew nothing about politics.

Legendary journalist Gay Talese was host Chris Matthews‘ guest during a segment on the New York Democratic primary. Matthews introduced Talese as one of his heroes, and threw to him a particularly long and tricky question about the fight between Hillary Clinton and Bernie Sanders. “How do you reunite come Philadelphia in July when they’re supposed to get together and hold each other’s hands in the air when you’ve said that kind of stuff?” he asked.

“Yeah, but I’m not a political junkie,” said Talese.

To his credit, Matthews managed to salvage the interview by redirecting to a question about how New York City’s culture affected the race, a topic more to Talese’s expertise. But even then he hit some speedbumps. “When [Sanders] says that [Israeli Prime Minister] Benjamin Netanyahu is not right all of the time, you’d lose your job if you said that. There’s not a columnist in The New York Times…”

“Although Roger Cohen supported him today in the Times,” Matthews pointed out.

“Oh did he? You’re more informed than I am,” Talese responded.