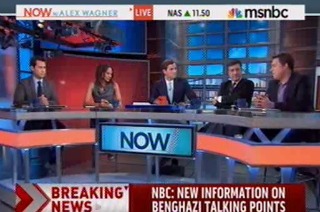 After examining all the details that emerged on Friday relating to the efforts by members of President Barack Obama’s administration to remove references to Islamic terrorism when explaining the reasons behind the 2012 attack on an American consulate in Benghazi, the panel guests on MSNBC’s Now agreed that the appearance of a scandal makes the White House “look terrible.” One guest even suggested that the controversy could lead to impeachment proceedings against the president.

NBC Reporter Kelly O’Donnell read from portions of emails in which high ranking State Department officials coordinated with the CIA to alter the official talking points on the Benghazi attack to remove any references to prior warnings or Islamic terrorism.

“This is quite the window into what is usually the hush-hush process about how to deal with these types of attacks and the spin that irrevocably comes afterwards,” NBC reporter Luke Russert opined.

“This is not good for the White House right now,” Russert said to BuzzFeed editor Ben Smith. “Does it stick?”

Smith said that the emails indicate that former Secretary of State Hillary Clinton may have been directly involved in the process of “scrubbing” references to Islamic terrorism from her department’s talking points.

“Does this become then an election politics thing?” Russert asked. He said that the Republican Party has been trying to link Clinton to the Benghazi scandal for some time.

The Daily Beast columnist Michael Tomasky said it does. He invoked “that word that starts with ‘I’” to describe the potentially significant political fallout that could result from the Benghazi scandal.

“It becomes a potentially impeachment issue as long as the Republicans are in control of the House,” Tomasky added.

“I think, for Clinton, it looks Clintonian,” submitted Washington Post reporter Nia-Malika Henderson. “It also, I think, reminds us that there is only one person that the far right-wing hates more than Obama, and that’s Hillary Clinton.”