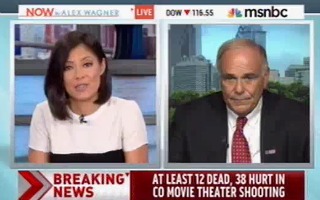 MSNBC’s NOW with Alex Wagner dove into the contentious issue of gun control on Friday after a gunman engaged in a horrific mass shooting in Colorado, which claimed the lives of at least 13 people and wounded scores more. While many in the world of political commentary have held their tongues about their personal policy preferences after this attack, given that so many details are as yet unknown, Wagner’s panel guests did not exercise that level of caution. MSNBC’s panel guests, including former Pennsylvania Gov. Ed Rendell who has been particularly vocal in his support of gun control laws, did not provide a counter balance for many of their pro-gun control claims.

“What do you make of this moment as far as furthering the debate and the discourse around guns, gun control and the role guns play in our society,” asked Wagner.

“The sad part is the only time we discuss any reasonable attempt to limit the sale and distribution of guns is after tragedies like this,” said Rendell. He said that politicians are purely afraid of the influence that the National Rifle Association has over electoral politics. Rendell said that the NRA’s influence is over-inflated and politicians should not fear a backlash when they advocate for gun control.

Rendell advocated for the reinstatement of the 1994 assault weapons ban and for the passage of a bill that died in the Senate after Rep. Gabrielle Giffords was shot that would limit pistol magazines to carrying only 11 bullets. “It never got out of committee because everyone is petrified of the NRA,” said Rendell.

“There are some things worth losing for in politics and to be able to prevent carnage like this is worth losing for,” said Rendell. MSNBC brought on a gun control advocate to hammer the point home – one would have to imagine that the guest booker just couldn’t get ahold of a gun ownership advocate to provide balance at such short notice…

Alleged shooter James Holmes was armed with a .40 caliber Glock handgun, a Remington shotgun and an AR-15 assault rifle as well as a smoke or teargas grenade. All those weapons are legal and can accommodate larger magazines, but it is not yet known whether Holmes had extended capacity magazines in those weapons. Furthermore, the AR-15 was not banned by the 1994 Violent Crime Control and Law Enforcement Act – only certain features like protruding stocks and pistol grips were controlled (but were still manufactured for law enforcement and remained available to those willing to break the law to get them).

There is no evidence yet that any gun control measure that was ever on the books nationally would have prevented this atrocious attack.

Personally, I am not a gun owner. I had the opportunity to fire a semi-automatic pistol as a child but I declined. I am not attracted to fire arms and do not intend to own one at any point in my life — but I reside in an urban environment where law enforcement is no more than five minutes away at any given moment. That is not the case for many millions of suburban and exurban American citizens.

On the issue of gun control – I’m rather indifferent to the subject. As a Second Amendment right, it flirts with unconstitutionality for local governments to deny gun owners access to their protected right to own that piece of property (in some cases, gun control laws have been declared in violation of the Constitution and struck down). That said, crime-ridden local governments are obliged to do their best to limit criminal’s access to firearms, and creative law enforcement is an important aspect of modern crime reduction.

The places where there are strident gun control laws do not have an especially great track record of avoiding gun violence. In Chicago, where a 28-year ban on handgun ownership was overturned by the Supreme Court in 2010, there have been 275 gun-related murders this year alone and many more shooting injuries as of July 11. Chicago is now voluntarily loosening its present gun control laws which may allow citizens to cope with mounting violence.

While the drop in murders cannot be directly connected with the increased access to lawful gun ownership, it cannot necessarily be separated either. The argument that gun owners advance in states with concealed carry permits is that the ubiquity of handguns decreases the threat from unhinged individuals like Colorado’s James Holmes.

Abroad, in the liberal enclaves of Scandinavia, which is often cited models for successful gun control laws, there are still high profile incidents of gun violence despite the restrictions on their ownership. In 2007, 18-year-old Pekka-Eric Auvinen killed 10 of his fellow high school students and himself in Finland. His pistol was legally acquired legally and he had no criminal record. In the tragic 2011 attack on a children’s camp in Norway, Anders Breivik used an AK-47 he had brought with him from Poland to commit his atrocity.

The law did not dissuade these deranged individuals from their actions – but that is not evidence that the laws in question are not sufficient. That is an indication that there are no laws iron-clad enough to prevent a sick individual who is determined to die and take others with them from committing their heinous act.

Rendell describes gun control legislation as “common sense,” but it is simply misleading to dismiss arguments against gun control laws without even giving them a fair hearing. Rendell’s offense is particularly egregious today — when an atrocity of still-unfolding proportions plays on the emotions of well-intentioned MSNBC viewers.

There are and will always be bad actors – they cannot be outlawed. Gun control advocates should take a deep breath and let the dust settle before they use this atrocity in Colorado to advocate for a particularly desired policy preference.