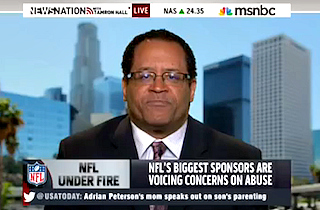 MSNBC contributor and professor Michael Eric Dyson told Tamron Hall Thursday morning that child abuse “is a pathology we have failed to address as African-American people.”

Dyson argued that corporal punishment had been internalized from slavery practices meant to keep black children from crossing the slave master and incurring a harsher fate, and was now used to prevent African-American children from angering police officers and incurring the same. The result, Dyson said, was a generations-long routinization of black-on-black violence.

“Black people were beat and hit in slavery,” Dyson said. “Some slave parents, especially women, had to beat their kids in front of the slave master to prove that they could go along with the slave master’s intention and keep them from being rebellious spirits. …As a result of that, we began to absorb that practice, collectively speaking, and we’ve reproduced it.”

“One of the reasons many African American people beat their kids is to prevent them from being beat by their master even worse,” Dyson said. “And one of the reasons we beat our kids so severely now is because we don’t want the police to hurt them later. …So instead of approaching the police to make sure they don’t kill our kids, we of course make sure that the only power we have is to make sure that our kids are behaved correctly.”

“We have seen the devastating consequences of this kind of criminal punishment of our children,” Dyson continued. “When we look at the black on black crime, the hate we have for each other, let’s not simply talk about it through the gaze of white supremacy, let’s talk about the reproduction of the pathology of our own self-hatred and what we’ve done to each other.”