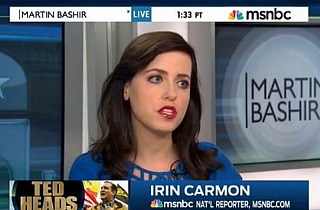 MSNBC contributor and columnist Irin Carmon appeared on MSNBC with Martin Bashir on Monday where she said that the person who brought a Confederate flag to a tea party protest in Washington D.C. over the weekend may have been trying to threaten President Barack Obama.

“What exactly is the message that they’re seeking to send the president?” Bashir asked of the individual who brought a Confederate flag to this weekend’s protests in front of the White House.

“To me, this is a threat,” Carmon replied.

“This is a house where a black family lives,” she continued. “This is a symbol that is nostalgic for a time when black people were subjugated and enslaved.”

“I think there is something deeply enraging to these folks that there is a black family living in the White House right now,” Carmon added.

“I think it’s a threat,” she repeated.

“You think it’s a threat directly to the president?” Bashir asked.

“It certainly is very menacing,” Carmon clarified. “And I think there are people who would say that’s not what it means, but Ii think the problem is that the Republican grass roots is no longer even the underbelly that are out there screaming.”

“There were only a couple hundred folks, but there were leaders like Sarah Palin and Ted Cruz indulging their worst paranoid fantasies,” Carmon concluded.