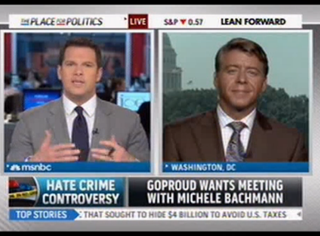 The gay conservative group GOProud caused a bit of a stir last week by inviting Rep. Michele Bachmann to meet with them, as her campaign struggled with allegations that her husband’s clinic practiced gay reparative therapy. The group’s Executive Director Jimmy LaSalvia explained the invite to MSNBC anchor Thomas Roberts, who incredulously argued that, in hypothetically voting for Rep. Bachmann, LaSalvia would vote to replace President Obama “with a person that would extinguish you.”

Roberts began his interview asking LaSalvia about a recent incident in which he warded off would-be hate criminals by pretending to have a gun. Approached and called gay slurs by some unidentified persons, LaSalvia dipped into his bag as if to reveal a weapon and escaped safely. “My outcome could have been completely different had they not thought I had a gun,” he explained, noting that “Second Amendment rights are gay rights” and that legislators should “focus on policies that actually help prevent hate crimes.”

Roberts then shifted gears to the Rep. Bachmann invitation, inquiring as to the progress of the potential meeting and why the group had called her in. “Gay Americans are living in the Obama economy, too,” LaSalvia replied, adding that replacing him was a priority for the group. To this, Roberts protested: “but you would replace him with a person that would extinguish you,” he said of Rep. Bachmann, “that doesn’t believe you have a right in this country to get married… that believes you don’t even have a right in this country to be gay because she owns a clinic that would convert you.”

“I think all the presidential candidates should hear our perspective as gay Americans,” LaSalvia responded, noting that, regardless of initial opinion on the LGBT community, “it’s important for anyone running for that office to hear that experience.”