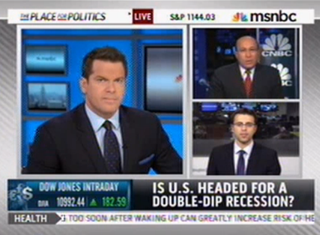 It’s been frustrating for many in the media and the American people to sit back and watch the markets go crazy since America’s credit downgrade on Friday, while some of the few people who can react to situation are on vacation. Case in point: MSNBC’s Thomas Roberts, who in speaking with guest Ezra Klein today suggested that future Congressional inaction in light of the dire situation may be considered “an act of treason.”

Roberts was discussing the market madness with Klein and CNBC’s Ron Insana, noting that Klein’s blog had posted an analysis that suggested that Congress would be less inclined to act to stop the decline the deeper it went. The article, by contributor Suzy Khimm, elaborates on how difficult it is to build consensus around any plan in a polarized Congress, and how the situation gets only increasingly complicated as the economy declines. Roberts turned to Klein and cited the piece, asking if “the worse this gets, the less likely Congress will act to stop the bleeding, why don’t people look at that as an act of treason?”

Klein didn’t comment on whether it was treasonous or not, but added that “it’s a reality of politics right now– for Republicans, they’re in better shape if the economy is doing poorly and Obama looks week.” He was quick to note, however, that there was nothing sinister about this: “I don’t think what happens is Mitch McConnell and John Boehner retire to their volcano lair and plot how to doom the economy.” He did note that the climate was ripe for gridlock and that “we actually do need government action,” but it was difficult to come to a consensus on what that would be.

Insana jumped in to add that the idea that “deficit reduction in the short run would somehow help the economy” was “flatly untrue,” as cutting costs would mean more government employees out of work and drowning the job market.