NBC News Political Editor: Once Website Fixed, Most Politicians Will Move on From Obamacare Fight
video

NBC News Political Editor: Once Website Fixed, Most Politicians Will Move on From Obamacare Fight 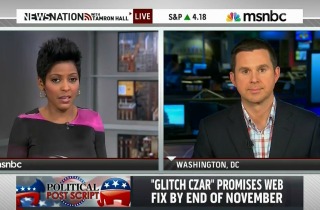 NBC News Senior Political Editor Mark Murray declared on Friday that the problems associated with the health insurance exchanges website are going to be fixed before December, according to federal estimates. He told MSNBC anchor Tamron Hall that, once the website has been fixed, most Democrats and even some Republicans will move on forever from arguing over the Affordable Care Act.

Murray began by asserting that November 30 is the latest deadline by which point the government believes the health insurance exchanges will be operational online. He added that they will have to be because “all of the traffic was supposed to start coming in December.”

“If it actually is fixed by November 30, I don’t think there’s going to be much of a problem,” Murray added. “We’ll look back on this two or three years from now and see that this was just kind of a was a blip on the radar screen, much like the president’s first debate with Mitt Romney where it was more of a historical footnote than something that actually ended up mattering.”

Murray added that, once the website is fixed, most Democrats and many Republicans will abandon the battle over the Affordable Care Act and cease fighting about an issue that has dominated public discourse for the last four years.

“After fighting this battle for more than four years now, Tamron, if the websites are up and operational, I think you will end up hearing Democrats and maybe some Republicans saying let’s move on to other issues and stop fighting the same fight we’ve been fighting for the last four and a half years,” he concluded.