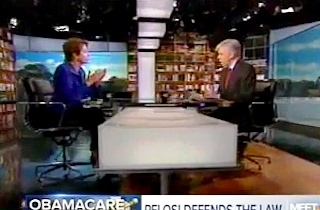 Meet the Press host David Gregory played for House Minority Leader Nancy Pelosi her now-infamous statement on the Affordable Care Act that “We have to pass the bill to find out what’s in it,” and asked if the alleged hurry to pass health care reform in 2009-2010 had led to the current quagmire over its rollout.

“Isn’t that really the problem, as you look back on it?” Gregory said. “That there was such a rush to get this done—no Republicans voting for it—and now there are unintended effects of this that were foreseen at the time, that you couldn’t know the impact of, and that now this is coming home to roost?”

“I stand by what I said there: when people see what’s in the bill, they will like it, and they will,” Pelosi said. “It took a great deal for us to pass the bill. I said, if we go up to the gate and the gate is locked, we’ll unlock the gate. If we can’t do that we’ll climb the fence. If the fence is too high, we’ll pole vault in. We had to pass the test of the courts, and we did.”

“This was never thought to be easy,” Pelosi continued. “It doesn’t matter what we’re saying here. What matters is what happens at the kitchen table of the American people, and how they will more affordability, more accessibility, better quality care, prevention, wellness, and a healthier nation.”