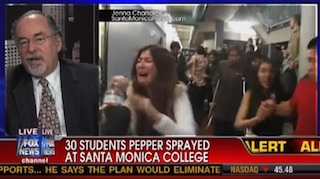 This morning, the Internet erupted over a video of students from Santa Monica College being pepper sprayed by campus police. The students were trying to enter a Board of Trustees meeting to protest a tuition hike when about 30 of them were sprayed. So far, much of the media coverage has focused on the campus police’s actions (the school has instigated a probe into the incident), but a segment on Your World with Neil Cavuto took it another way. Whereas some people watch the video and wonder how we can stop the growing trend of people being viciously pepper sprayed by authority figures, Your World guest David Horowitz watched it and wondered how we can stop all these darn kids.

“This is mob rule. This is a mob and all these students should be put on probation or expelled for their behavior. The Board of Trustees had a plan, it was aired. There’s a way to complain about a plan. Barging into a Trustees meeting as a mob isn’t the way to do it.”

Cavuto compared the video to those taken in Greece and made the point that it’s not like the Trustees “weren’t altering this to charge you what they do at Harvard.” Right. As we all know, there’s a minimum amount that a tuition hike can be before Americans are allowed to complain.

Meanwhile, Horowitz continued to explain why the students represented the worst of America.

“They want free education! ‘We’re gonna have free contraceptives so why not free education, free food, free shelter?’ That’s where this is going and what’s driving it is the anarchist, communist left, the Occupy movement across the country which was involved also in the UC Davis incident where there was pepper spray. You can’t have mobs running around like that. You can’t have that kind of disrespect for other people’s opinions and other people’s property.”

Who’da thunk that a video of screaming young people being pepper sprayed in the face was as open to interpretation as a Rorschach Test. Oh well. At least no one called the spray a food product.

Meanwhile, at least three of the students were hospitalized.