Former Speaker of the House Newt Gingrich told Fox Business’ Maria Bartiromo that his Twitter account had been “suspended,” allegedly for a tweet he posted about illegal immigrants bringing Covid-19 to Texas.

Gingrich was on Mornings with Maria to discuss H.R. 1, a voting rights bill that has passed the Democrat-controlled House, when he surprised Bartiromo with his news.

“I just got suspended by Twitter, so I’m part of the censored group because I did a tweet saying that having illegal immigrants come in without any controls is a public health issue in the time of Covid,” said Gingrich. “So I just want to report, I’m part of the same effort by Twitter to censor the country on its own terms.”

“Unbelievable,” Bartiromo replied. “You’ve been suspended from Twitter now. Who put these companies in charge of being the arbiter of truth? What you tweeted is absolutely true. We had a Covid threat because of all of those people who had Covid who came into the country illegally. So what’s untrue about what you said?”

Gingrich said that he had submitted a request asking Twitter to explain the reason for the suspension, and criticized the social media company. “What they’re doing, what all these big companies are doing, is they’re setting the stage for a real populist backlash that will either make them liable to lawsuits, or have real controls over them, or break them up. I mean, Twitter’s behaving as though it’s a dictatorship and it’s not.”

Other Twitter users posted screenshots of Gingrich’s now-removed tweet. “If there is a covid surge in Texas the fault will not be Governor Abbott’s comon [sic] sense reforms,” Gingrich wrote. “The greatest threat of a covid surge comes from Biden’s untested illegal immigrants pouring across the border. We have no way of knowing how many of them are bringing covid with them.” 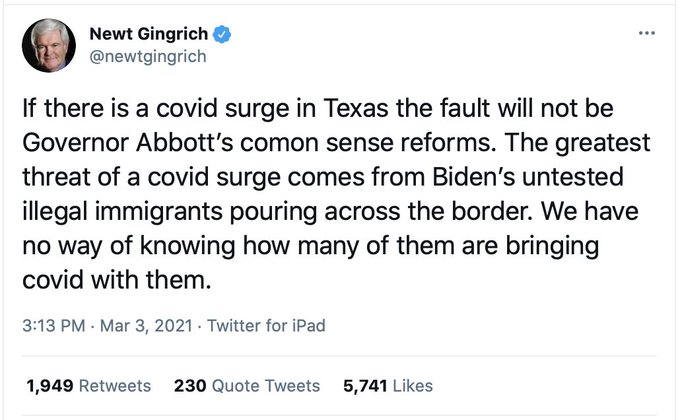 It’s an argument that has been used by multiple Texas Republicans in recent days, as reported by the Daily Kos. As the libertarian-leaning Reason noted, the claims seem to arise from reports that “a small fraction of asylum seekers released in Brownsville have tested positive for COVID-19.”

The city of Brownsville tested asylum seekers for Covid at the bus station after they are released from Border Patrol custody, and anyone with a positive result was urged to quarantine. A total of 108, or 6.3 percent, of the immigrants who arrived in Brownsville between January 25 and March 1 tested positive.

As Reason explained, those 108 people represented somewhere between 0.06 and 0.o4 percent of Texas’ total Covid-19 cases: “The notion that such a tiny cohort is contributing significantly to the epidemic in Texas, even assuming that they completely ignore the recommended precautions, is hard to take seriously.”

Mediaite reached out to Twitter for comment, but did not receive a response. It is not clear if Gingrich’s apparent suspension is permanent or temporary, and if only temporary, how long it will last.

Update 6:50 pm ET: A spokesman for Gingrich also replied to Mediaite’s request for comment, sending the following quote from Gingrich:

“I fail to see how drawing attention to the public health dangers of massive illegal immigration during a pandemic can be censored. Several Texas Democratic Congressman have warned publicly that the United States is on the edge of a crisis on the border — and that there is a significant public health threat as part of that crisis. I hope twitter will recognize its mistake and reopen my account.”

The spokesman also provided the text of a message he said that they sent to Twitter asking for the account to be reinstated:

I received a notice that Speaker Newt Gingrich’s account has been locked for “hateful content” that “promotes violence against, threatens, or harasses.” A glitch or bug in your code algorithm might have triggered this action as there is nothing in the content of the tweet in question that does any of these things. In fact, the tweet makes the case that since people who are coming into the US illegally are not being tested for COVID, and there is currently a huge surge of traffic at the border, that this poses a greater public health risk to Texas than Governor Abbot’s actions to open up businesses again. You can make an argument for or against this position, but it is not hateful content and it does not promote violence, threaten or harass anyone.

Please let me know when the Speaker’s account will be available again, and we look forward to supporting your business ventures moving forward.

If there is a covid surge in Texas the fault will not be Governor Abbott’s common sense reforms. The greatest threat of…

Watch the video above, via Fox Business.