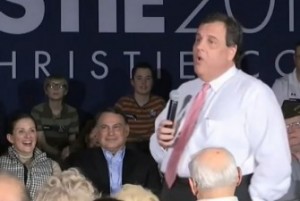 Campaigning in Derry, New Hampshire Wednesday night, New Jersey Governor and Republican presidential primary middleweight Chris Christie met up with a voter who out-Christie’ed Christie. Known for his four-hour-erection-aggressive style,  Christie was asked by a woman who identified herself as a “fellow goombah,” when he was going to “take the gloves off” and start “smacking around” frontrunner Donald Trump. Christie was amused at the affectionate slur, a slang term for Italian-Americans, but didn’t have much of an answer, telling her he would attack “when it makes sense to”:

Voter: You’re a fellow Goombah. When are you going to take the gloves off and start smacking him around?

Christie: When I think it makes sense to.

Voter: You’re running out of time!

Christie: No, we’re not running out of time. No one has voted yet. How many times have you people in New Hampshire turned the polls upside down? Listen, you know when I will? When I think it makes sense to, OK? I’m not in this to just beat Donald Trump. I’m in this to become president of the Untied States, and I have to make certain decisions about when I’m going to say what I’m going to say.

If you think there’s probably more to it than Christie’s letting on, you might be correct. When asked about it on Thursday’s Morning Joe, Christie was more than happy to take a swipe at panelist Donnie Deutsch, joking that he’d just as soon enter into a “murder-suicide pact” as engage Deutsch on the question, then proceeded to explain that he wasn’t going to attack anybody, then in the same breath attacked two other guys who aren’t Donald Trump:

It’s stunning to me I’m not accepting Donnie’s advice after all the great things he said to me over the years. Nonetheless, the only thing I think I’d engage in with Donnie Deutsch is a murder-suicide pact. I don’t have any desire right now at all to engage with any one particular person. One thing I will tell you is as I traveled in the state yesterday, I had a half dozen people come up to me and say to me they’re really disgusted with the ads up here, and all the negativity from Jeb Bush and Marco Rubio. They said we’re happy you’re above the fray.

Oh, yeah, murder-suicides are hella funny. I guess none of Christie’s rich, white friends ever tried one of those.

Aside from Christie’s whiny jab at Deutsch, who isn’t running for anything and has zero effect on Christie’s chances, notice how Christie was perfectly willing to attack Jeb Bush and Marco Rubio, but avoided Trump like he was trying to keep his boner by not thinking about the wrong thing. Christie is avoiding attacking Trump for the same reason Ted Cruz did for so long. The only difference is that Ted Cruz didn’t have any fake tough-guy rep to protect.