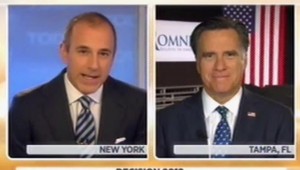 On NBC’s Today Show Wednesday morning, host Matt Lauer underscored just how nasty this 2012 Republican primary campaign has gotten, and how quickly, when he asked former Massachusetts Gov. Mitt Romney to confirm whether he had received a congratulations call from former House Speaker Newt Gingrich following Romney’s victory in the Florida primary. Romney revealed that Gingrich did not call last night…or after Romney victories in Iowa (apparent victory, anyway) and New Hampshire.

“It’s reported that Newt Gingrich didn’t call to congratulate you on the victory in Florida,” Lauer said. “Is that true? Were you expecting a call, and does it say something about the animosity that’s developed between the two of you?”

“Newt didn’t call after Iowa or New Hampshire,” Gov. Romney revealed. “I called him after South Carolina, his win there, but he didn’t call last night. The other candidates all called. I don’t know. I guess Speaker Gingrich doesn’t have our phone number.”

Calling your opponent after a victory is customary, like shaking hands with the other team at the end of a Little League game, but it’s one of those things that nobody notices unless some kids spits in his hand first. One famous example is Al Gore’s 2000 anti-concession call to George W. Bush, in which Gore told Bush “You don’t have to get snippy about it.”

Lauer described it as a “trivial matter,” but it does illustrate something about this year’s campaign.

In 2008, then-Sen. Hillary Clinton made headlines when she failed to call then-Sen. Barack Obama (or mention the wins in post-primary speeches) after two primary victories, but that was in mid-February, after 29 primary contests had already been held, and a lot more water had gone under the bridge. Gingrich, if Romney is to be believed, began choking on sour grapes out of the gate.

To be fair, Gingrich has been been the Romney campaign’s personal batting-practice ball for months now, culminating in the running of 92% negative ads in the week before the Florida primary. On a human level, it’s easy to understand why Gingrich might not be anxious to reach out and touch Romney after an attack-fueled vivtory.

On the other hand, it’s tough to shed any crocodile tears (or even a tear of newt) for Gingrich, given the nastiness with which he has attacked President Obama. Those attacks notwithstanding, if Gingrich somehow manages to win the privilege of losing to Barack Obama, I’m betting the President calls him anyway, maybe to favor him with a song.