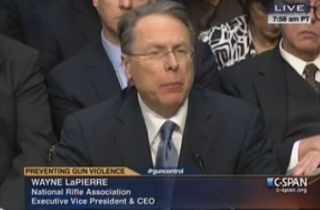 Appearing before the Senate Judiciary Committee this morning, National Rifle Association CEO Wayne LaPierre called on Congress to look at the “full range” of issues that affect the mental health system, rather than focusing on stricter gun control laws, which LaPierre said will not work. “Law-abiding gun owners will not accept blame for acts of criminals,” he told the committee.

“There is nothing more precious than our children and we have no more sacred duty than to protect our children and to keep them safe,” the NRA head continued. “That is why we asked a former congressman and undersecretary of Homeland Security to bring in every expert to develop a model shield program, one that can be individually tailored to make our schools as safe as possible. It is time to throw an immediate blanket of security around our children.”

LaPierre reiterated his organization’s proposal to have armed security in all schools as a measure of increasing safety. He lamented that “federal firearms prosecution’s per-capita were down 35% from their peak in the previous administration, that means violent felons, a violent gang members and drug dealers with guns and the mentally ill who possessed firearms are not being prosecuted. That is completely and totally unacceptable.”

Echoing the sentiment of many gun advocates, LaPierre then turend his attention towards the mental health system: “I think we can agree that our mental health system is broken. We need to look at the full range of mental health issues, from early detection treatment, to civil commitment laws, to privacy laws that needlessly prevent mental health records from being included from the national list.”

He then criticized the media and members of the committee for believing in stricter gun control measures: “While we’re waiting for a meaningful effort to solve these pressing [mental health] problems, we must respectfully, but honestly and firmly disagree with many members of the committee and the media on what will keep our kids safe. Law-abiding gun owners will not accept blame for acts of criminals.”

LaPierre told the panel that Sen. Dianne Feinstein‘s proposed new rules would be ineffective. “Semiautomatic firearm technology has been around for 100 years,” he said. “They are the most popular guns for hunting, target shooting, self-defense. Despite this fact, congress banned the manufacture and sale of hundreds of semi-automatic firearms from 1994 through 2004. Independent studies, including one from the Clinton Justice Department, proved it had no impact on lowering crime.”

As for the proposed expansion of background checks: “Let’s be honest. They will never be universal because criminals will never submit to them.”

Watch his full prepared remarks below, via C-SPAN: