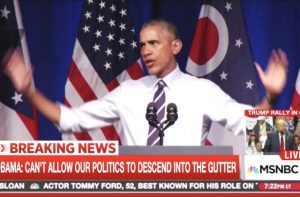 He took a more mocking tone towards these Republicans earlier this week but tonight, well, he went ham:

“They know better, a lot of these folks who ran, and they didn’t say anything, so they don’t get credit for, at the very last minute, when finally they guy that they nominated and they endorsed and they support is caught on tape saying things that no decent person would even think, much less say, much less brag about, much less brag about or joke about, much less act on, you can’t wait until that finally happens and then say, ‘Oh, that’s too much! That’s enough!’ and think that somehow you are showing any kind of leadership and deserve to be elected to the United States Senate! You don’t get points for that!”

He said he’s “more forgiving of the people that actually believe it than the people who know better and stood silently by out of political expediency because it was politically convenient.”

The president was amazed by how Republicans are standing by such a morally corrosive man when they’ve said for years they’re the party of “family values.”

“I’m sorry, what happened?!” he cried. “It’s disappointing. It really is.”

He concluded, “If your only agenda is either negative––negative’s a euphemism for crazy––based on lies, based on hoaxes, this is the nominee you get. You make him possible.”