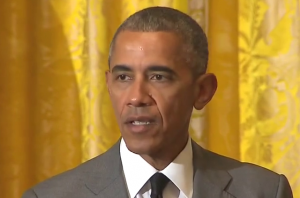 During a White House address Friday, President Barack Obama not-so-subtly called out former Speaker of the House Newt Gingrich for his comments suggesting that every Muslim in the U.S. should be questioned and/or deported.

“In the wake of last night’s attacks, we have heard more suggestions that all Muslims in America be targeted, tested for their beliefs, some deported or jailed,” Obama began in his first public comments since the Nice terror attack.

“The very suggestion is repugnant and an affront to everything we stand for as Americans,” he said bluntly. “We cannot give into fear or turn on each other or sacrifice our way of life. We cannot let ourselves be divided by religion, because that’s exactly what the terrorists want. We should never do their work for them.”

Obama argued that freedom of religion helps “keep us strong and safe” and that Americans have to be protect it. “It’s been a difficult several weeks here in the United States, but the divide that exists is not between races and ethnicities and religions. It is between people who recognize the common humanity of all people and are willing to build institutions that promote that common humanity, and those who do not,” he said.

The president’s remarks come hours after Gingrich walked back his comments in a Facebook video, saying that Muslim citizens should not be deported. He did however argue that courts and legislators should “revisit” many of the rights granted to legal residents who aren’t citizens.