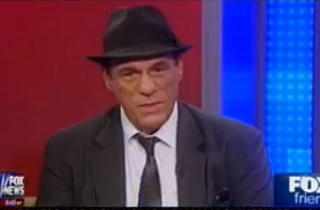 Yes, fellow liberals, there are conservative Hollywood celebrities, and they don’t all suck. Case in point: character actor Robert Davi, who played Agent Johnson (“No, the other one.”) in 1988’s Die Hard, and who has had a long career playing convincingly menacing characters. Davi appeared on Fox and Friends this week to promote his new film The Iceman, and to explain how political correctness is ruining America. He pined for the days when everybody “had fun” throwing around “racial slurs,” and Amos ‘n’ Andy was a big hit, but also displayed some apparent sensitivity about anti-gay slurs.

Apparently, the whole thing started when Davi had a bit of an all-caps meltdown on Twitter over the Mirandizing of Boston Marathon bombing suspect Dzokhar Tsarnaev. A bewildered Davi tweeted “‘I am all for maintaing our rights but HOW THE H— DOES AN FBI SANCTIONED INTERROGATION GET SHUT DOWN OF A TERRORIST!!!!WHO IS THE TRAITOR,” then asked “‘WHO SHUTDOWN THE INTERROGATION ?? are WE ALL A BUNCH OF CLUELESS SHEEP THAT DO NOT SEE THE DANGER IN THIS ??? WHO OUT THERE HAS ANY INFO??”

“‘EVERY AMERICAN SHOULD DEMAND WHAT THIS IS ABOUT ??? WHY WAS THE INTERROGATION STOPPED- WHAT IS BEING HIDDEN??THIS SHOULD BE THE TOP NEWS,” Davi continued, before concluding that, of course, “‘ Politically Correctness has crippled those accused of doing it and those who it supposedly is being sensitive to-a lose lose proposition.”

I’m not sure what Davi thinks political correctness had to do with Tsarnaev’s interrogation, unless Don Rickles has covertly embarked on a career as an F.B.I. interrogator. As near as I can tell, that was an issue of constitutional correctness.

Sensical or not, Davi’s tweets did give him  “provocative” peg for his F&F hit, in which he found hearty agreement from hosts Steve Doocy and Brian Kilmeade that political correctness has resulted in the “overall collapse of our ability to have our own freedom of speech and expression.”

For example, Davi pointed out, “The Rat Pack, those guys could make fun of each other, the racial slurs, everything else. Everybody laughed. They had a good time doing it, and nowadays, I tweeted that political correctness is a lose lose situation.”

Kilmeade and Doocy pointed out that no one will even rerun shows like All in the Family or The Jeffersons anymore (except when they do), and Davi chimed in with “Amos ‘n’ Andy! You were able to have fun with each other, and now all of a sudden it’s political correctness, even with the feminist movement, the buzz words. They boxed us into a corner where there is an antagonism.”

However, when Doocy asked Davi “You miss the old days when there wasn’t the PC that there is today?” Davi displayed some sensitivity.

He then went off on a tangent about Russia and the Soviet Union, which is where we’re headed if we can’t compliment Gretchen Carlson’s legs, or some such, and Kilmeade called someone a “sweet broad,” and Davi said he doesn’t mind when people think he’s in the Mafia. Also, see his movie:

It would be a simple thing to get all outraged about Robert Davi’s scattershot critique, like Newshounds did, but I don’t really think he’s pining away for the freedom to drop n-words at will, or watch stereotypical depictions of black people on TV. He’s just confused about what “political correctness” is really all about, but his attitude towards bullying shows that maybe he’s capable of understanding.

Political correctness is really just about being polite. Call it “Polite-ical Correctness™,” if you will. Yes, it can be confusing for an older white guy to understand why a woman doesn’t appreciate being praised for her “sugar tits,” because we have no way of knowing what that feels like, we just know we mean it in the nicest possible way. The thing is, we don’t have to understand why she doesn’t appreciate it, we just have to understand that she doesn’t appreciate it. If someone expresses a preference not to hear your hilarious “WOP” joke, the polite thing to do is not to tell it. That’s pretty simple. You’re still free to tell it (as long as you’re not at work), but then you might not get such a polite reaction. This isn’t “tyranny” any more than “forcing” you to take a dump in a “colonically correct” special room in the house. It’s just good manners not to shit in the middle of the floor.

Davi would obviously prefer that other people not call his children “faggot,” or other buzzwords, and he doesn’t think that’s tyranny. He’s right about that, it’s just good manners. All he needs to do now is work on caring about how people who aren’t blessed with Davi blood feel. Or not. The freedom is his.