Hasselbeck: Why Don’t Feminists ‘Burn Their Bras’ When Conservative Women Are Attacked
video

Hasselbeck: Why Don’t Feminists ‘Burn Their Bras’ When Conservative Women Are Attacked 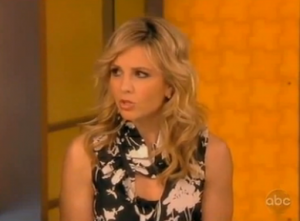 “We can’t seem to get away from Rush Limbaugh,” Barbara Walters said at the beginning of today’s episode of The View. Yes, the controversial radio host was the first hot topic on the show. Again. This time, the panel was discussing an open letter written by Jane Fonda, Gloria Steinem and Robin Morgan calling for Limbaugh’s show to be taken off the air, because although he may be “constitutionally entitled to his opinions,” they argued that he was not entitled to express them on the radio.

Joy Behar, who would probably be most sympathetic to this kind of petition, decided that she had to disagree with her “sisters,” (really?) saying that she thought the free market ought to determine who stays on the air and who goes. Elisabeth Hasselbeck already seemed very heated about the issue, wondering why these feminists weren’t “burning their bras” (really?) when conservative women suffered personal attacks in the media. Walters countered with a list of radio and TV personalities who were fired for offensive remarks — from Don Imus to Juan Williams to Rick Sanchez, but noted the distinction was that they were fired by their bosses and not the FCC, which is what Fonda, Steinem and Morgan were advocating for. Hasselbeck still seemed stuck on the perceived lack of sympathy for conservative women who are attacked, although it’s not totally clear if she believes that ought to cancel out what Rush Limbaugh said or if this was just something she wanted to get off her chest with regard to this particular group of feminists. You can see the clip here, via ABC: