O’Reilly And Bernie Goldberg Take On Dan Rather: First Paragraph Of Obit Will Contain ‘Memo-Gate’ 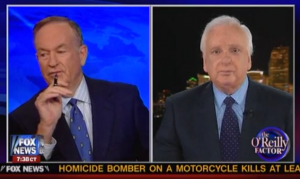 Former CBS anchor Dan Rather was supposed to make an appearance on The O’Reilly Factor tomorrow, but it turns out he cancelled. On his show Monday, Bill O’Reilly chatted with Bernie Goldberg and pondered why that might be.

RELATED: Dan Rather Doubles Down On Texas Air National Guard Story: Bush Was A Deserter

On Monday, Rather doubled down on his controversial report about President George W. Bush Texas Air National Guard service — the story that led to his leaving the network. “You lost in the court of law,” O’Reilly said. “Your assertion was not deemed credible.” How you do squared that? Rather would have to answer those questions, O’Reilly said, and that’s probably why he canceled.

Rather made his reputation being confrontational, O’Reilly observed, so one would think he’d take the opportunity to go to come on the show. He added that, if he kicked O’Reilly’s butt, Rather would look like a hero, so “it’s a win-win.”

You would think so. I mean, he took on in what turned out to be a disaster. He took on George Bush the elder on the CBS Evening News. He sat down face-to-face with Saddam Hussein who could have had him killed before he left the country. But, I know it doesn’t sound logical, but I think he is more comfortable with sitting down with a murderer, like Saddam Hussein, than he is — I know, you know what i’m going to say — than sitting down with you. I mean, look. The only reason people cancel, the only reason people cancel is because they have a conflict of scheduling and that wasn’t it.

O’Reilly said, “I think he is painfully aware of the fact that some day down the road when somebody writes the obit for Dan Rather, in the first paragraph it’s going to contain the words either Memo-Gate or Rather-Gate or something like that. I think that hurts him terribly.”

Goldberg added that Rather is “like Captain Ahab, who became obsessed with the whale, who did him in, he can’t let this go.”