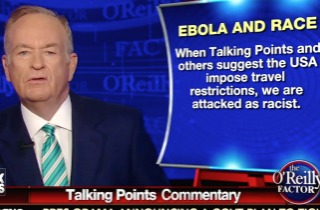 Bill O’Reilly spent a significant part of his first segment tonight decrying the “racism” accusations being thrown by some MSNBC commentators amidst nationwide Ebola panic. O’Reilly did not directly call out MSNBC in his Talking Points Memo, but it was very clearly aimed at them, since he had teased the segment with a clip of Alex Wagner saying some Republican comments on Ebola, including calling for a travel ban is “not even thinly-veiled racism.”

And that wasn’t the first time someone on MSNBC had invoked racism in talking about a travel ban; a guest on Melissa Harris-Perry‘s show did so earlier this month. O’Reilly went off on the liberal “grievance industry” on racism before going after MSNBC, dismissing them as “pathetic ideological loons who could not care less about attacking the folks.”

O’Reilly continued the conversation with Howard Kurtz, and they ended up tussling a bit over O’Reilly wanting the head of the CDC to resign. Kurtz thought a lot of the media coverage is overblown and that calling for Tom Frieden‘s head will not accomplish anything. O’Reilly disagreed vehemently.

But what they did agree on is that it’s silly for anyone to invoke racism. O’Reilly said, “They’re paying a huge price over at MSNBC for doing that.” Kurtz did note there have been some ridiculous race-baiting comments on the rights as well, making a reference to Fox’s own Keith Ablow, who made the ridiculous assertion that Obama doesn’t want to stop Ebola because his “affinities” are with Africa.