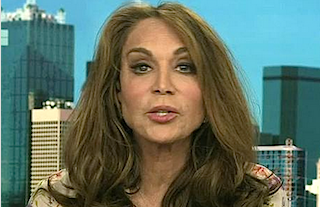 On Sunday night, hours after a horrific shooting at a “Draw Muhammad” cartoon event that left two gunmen with alleged jihadist motives dead, American Freedom Defense Initiative head Pamela Geller phoned into Fox News during the 10 p.m. hour. “This incident proves just how violent the war is on freedom, and it’s here,” she declared, clearly shaken. “It’s not just Paris or Copenhagen. It’s here. The war is here.”

Slightly dramatic? Well, few could blame her: The attack was aimed at her group, at her guests, and against her beliefs. No one could dispute that the gunmen wanted to punish the group for exercising their speech by killing people. (Thankfully, only one man was injured and the gunmen were killed by an off-duty police officer.) But less than 48 hours after the attack, and with an abnormally high number of cable news appearances — seven in the past day-and-a-half alone — Geller has seemingly relished in her newfound mainstream attention, turning her primetime interviews into something totally different.

On Monday, Geller tried to turn the tables and accused CNN’s Alisyn Camerota of Islamophobia “by saying I paint [Islam] with a broad brush.” She then repeated this assertion on The Lead with Jake Tapper, and hinted that she was persecuted by the media on Hannity. Tuesday is barely over, and already she’s made an appearance on Fox in which she baffled anchor Martha MacCallum by comparing herself to Rosa Parks and, in return, accused MacCallum of “looking to restrict my speech.”

With her accusatory tone towards the media outlets that previously (and rightly) ignored her as a “fringe” provocateur, it almost feels as though Geller is now happy to be on a grand “I told you so” tour. This is not to suggest she’s happy the gunmen attempted to kill people at her event — again, killing people for expressing their beliefs is very bad — but that she’s clearly enjoying the opportunity to bash the people who only now give her this platform because she is the focal point of a national controversy.

Along with her nascent cable news prominence came in-depth explainers on Geller’s long background, but all you really need to know is this: She relishes her role as a provocateur for the sake of arguing that Islam itself — not its radical interpretation, but Islam itself — is the cause of all jihad. And as right-leaning columnist James Kirchick points out, her methods alienate her supporters:

For those of us who genuinely want to combat extremism and promote liberalism in the Muslim world, Geller is a uniquely toxic presence in the public discourse. She makes it easy for Islamist apologists to avoid debate, as they can always point to Geller and her outrageous behavior for ready examples of how pervasive “Islamophobia” has become in American society.

Conservatives have long attempted to make the case that Islam is the one religion that takes to violence when offended by secular imagery, but it doesn’t appear as though Geller’s media hits will do anything to further that argument. It’s no wonder the shooting isn’t turning out to be the catalyst that would have changed America’s views towards radical Islam, or the foundation of an argument that the religion fundamentally opposes free speech: Pam Geller’s just being herself, without any concern for best methods to spread a message, and will inevitably nullify her own points.