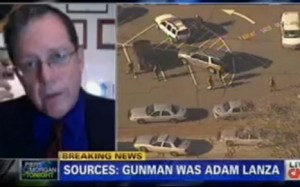 And so it begins. Following a sketchy report that Connecticut school shooter Adam Lanza may have had autism or Asperger’s Syndrome, CNN’s Piers Morgan Tonight booked a so-called expert named Dr. Xavier Amador to come on the air and slur people with autism. Dr. Amador, a media-friendly psychologist (a specialty that does not deal with autism) told Piers Morgan that “a symptom of autism” is that “something’s missing in the brain, a capacity for empathy, for social connection, which leaves the person suffering from this condition prone to serious depression and anxiety.”

Amador, in discussing the possible role of mental illness in this tragedy, pivoted to Lanza’s alleged autism. “With his autism, his roommate Alex Israel mentioned that he chose not to… he preferred to stay alone,” Amador began, referencing an earlier segment with a longtime classmate of Lanza’s. “Well, actually, a symptom of Asperger’s, and this is one report coming out which may or may not be true, is something’s missing in the brain, the capacity for empathy, for social connection, which leaves the person suffering from this condition prone to serious depression and anxiety.”

“And so, they’re fidgety, they’re anxious, they’re depressed, and if they are suicidally depressed…,” he hesitated, before saying the first true thing that came out of his face, “we don’t know enough. What I am trying to do in agreeing to come here is to ask people to don’t rush to judgment about who this young man is.”

That’s right, Dr. Amador doesn’t know enough, because people with autism, people with Asperger’s, aren’t “missing something in the brain,” nor do they lack a “capacity for empathy” or “social connection,” and there has been grossly insufficient study of Autism Spectrum Disorders’ (ASD) relationship with anxiety disorders. People with ASDs are as capable of empathy as neuro-typical people, if not more, but can have difficulty perceiving nonverbal social cues, which can make people who don’t know any better think they lack empathy. A TV expert speaking about autism should know better, and should also know that people constantly accusing them of being mass murderers is likely to cause more anxiety than the autism. Ditto the fact that developmentally disabled people are much more likely to be the victims of violence than the perpetrators of it.

It’s ironic that many of the clucking masses in the media caution that it’s way too soon to even discuss the role of guns in this tragedy, yet it’s perfectly fine to spread unfounded, inaccurate statements about a community that has little ability to defend itself.

Following the Aurora movie theater massacre, MSNBC host Joe Scarborough similarly slurred people with autism by saying that, “more often than not,” these murderers are “somewhere, I believe, on the autism scale,” then subsequently refused to make a correction. Here’s hoping that CNN, and Piers Morgan, have the decency to retract and correct the slur that this guest put out over their air, and hopefully, the rest of the news media will act more cautiously when discussing autism.