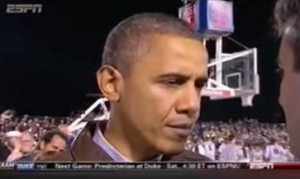 White House Press Secretary Jay Carney weighed in on the Penn State child rape cover-up at Thursday’s briefing, but at Friday night’s “Carrier Classic” basketball game, President Obama elaborated on those sentiments. Asked for his reaction to the story by an ESPN reporter, the President expressed concern for the victims, and called the situation a “good time to do some soul-searching.”

The President was on hand for the “Carrier Classic,” a college basketball game that pitted the University of North Carolina State against Michigan State, all on the deck of the aircraft carrier USS Carl Vincent. (UNC won the game, 67-55.)

ESPN asked the President for his thoughts on the Penn State story, in which a wide-ranging cover-up of child rape allegations against then-assistant coach Jerry Sandusky has already toppled head coach Joe Paterno and Penn State president Graham Spannier, whose firings were attended by student rioting. Here’s what the President had to say:

Well, obviously the whole situation is heartbreaking. We think first and foremost of the victims of the alleged crimes. But I think it is a good time for us to do some soul-searching, every institution, not just Penn State, about what our priorities are and making sure we understand that our first priority is protecting our kids.

The President’s response was characteristically measured, and while he’s absolutely right on most counts here (I would dispute the notion that stopping the rape of children falls anywhere on a list of priorities – it’s an event with only one acceptable response), this is one of those times when the President’s cool temperament doesn’t serve him well. I get that he was at an upbeat event, but this is another of those times when we’d like to see the President get worked up, or at least, I would.

Then again, if the President reacted to everything the way I do, I’m not sure I would be comfortable with him carrying the nuclear football.

One of the notions around this story that I think people are getting wrong is that institutions like Penn State, or the Catholic Church, cover up the rapes of children to protect themselves (the institutions) from mortal harm, from the supposedly devastating consequences of doing the right thing. That type of thinking, while reprehensible, gives these institutions far too much credit. No reasonable person could think that an organization would fear that stopping, reporting, and punishing child rape would cause the destruction of said organization.

No, what such stopping, reporting, and punishing does present is a nuisance. Pulling Jerry Sandusky off of that child, kicking his nuts into a smooth pate´, and dragging him by the nostrils to the nearest police station would have cost Mike McQueary nothing but a swollen foot. He would have been a hero. All it would have cost Joe Paterno was a child-raping assistant coach. However, it would have also meant momentarily upsetting the status quo.

As small a price as that seems, the decision to cover it up is based on the institution’s certainty that doing so would cost them nothing, that the victims were so insignificant next to their own power, and in their demonstrable belief that these children literally meant nothing. The ruining of their lives simply wasn’t worth the headache.

Talk to survivors of incest, and many of them will describe a similar dynamic within their own families, a tendency to resent the victim for upsetting the status quo, rather than to resent the rapist. The crimes themselves are inhuman, but this ex post facto denial is humanity at its worst, a lethally lazy desire to un-know what they know, and return to the warm cocoon of ignorance.

Covering up these crimes was not an act of misguided self-preservation, it was an act of inhumanity, in service of self-comfort.

Here’s the clip of President Obama’s comments, from ESPN: