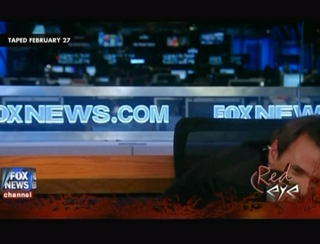 Red Eye is one of the funniest programs on television, though usually intentionally. Last night they let us in on a fantastically funny clip of their unintentional comedy, and the subsequent explanations of why this extended technical difficulty kept happening. The problem? Guest ombudsman Paul Mecurio doesn’t seem to like wearing a microphone very much, so he took it off while he wasn’t on air. Somehow, Mecurio managed to get the microphone tangled up in the wheels of his chair and spent a good two minutes of the Postgame Wrapup trying to salvage the microphone and shouting things at a chair.

As host Andy Levy threw to Mecurio (filling in for Levy, who was filling in for Greg Gutfeld), the camera shot to the ombudsman seat to find Mecurio folded in half, trying to grab something from the floor. It was the microphone, which he took off because he “didn’t want to be tethered, I wanted to be free.” “You’re going to be free from doing that job again,” Levy quipped, while the panel laughed and Mecurio complained everyone was “making me stressed out.” He still couldn’t get the microphone untangled from the wheel of the seat for a good minute, yelling things like “I grew up in a furniture store!” and generally cursing at the chair.

In Mecurio’s defense, he gave his full permission for the tape of him fighting a chair for a microphone while getting yelled/laughed at to air, so he’s the one to thank for this. He made the best of the clip airing though, as far as using it to attack Andy Levy. “You can see how sympathetic Andy is as a human being,” he jokes, continuing to insist that the reason he took his microphone off shortly before he needed it to air was because he wanted to be “free.” “Having that mic on your lapel really restrains you,” Levy deadpans, before asking if Mecurio learned anything from the experience. “Yes– that you’re an unsympathetic, evil human being,” he retorts.

The great clip via Fox News below: