Red Eye On Chick-Fil-A Controversy: YouTube Star Antoine Dodson Doesn’t Care And Neither Should You
video

Red Eye On Chick-Fil-A Controversy: YouTube Star Antoine Dodson Doesn’t Care And Neither Should You 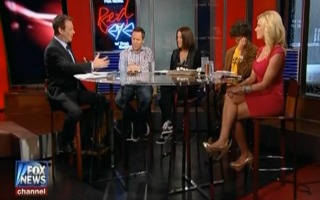 Red Eye host Andy Levy noted that Dodson, an internet celebrity and member of the gay community, has weighed in on the Chick-fil-A controversy and said that he doesn’t particularly care about the religious or political beliefs of the franchise’s leadership. His only concern is just how appetizing their chicken is.

“I don’t care about one person’s opinion or how they feel – that’s how they feel. That’s fine,” said Dodson. “Chick-fil-A makes good meals and I eat there, you know what I’m saying? Quite frequently. So, no one is going to stop me from eating there.”

“He is a treasure,” Levy noted after playing a clip of Dodson’s defense of Chick-fil-A.

“This guy is the conscious of America,” said Greg Gutfeld who had assumed his alternate ego for the evening, actor Victor Roberts. “What he’s saying is kind of what everybody thinks.”

“I think he’s actually said the most cogent, intelligent thing that has been said about this controversy in the last 20 years,” Gutfeld concluded.

Anna Kooiman asked who decided it would be a good idea to get Dodson on record with his opinions on Chick-fil-A. “Are we going to start interviewing all sorts of YouTube sensations,” she asked.

“But he’s smarter than every politician,” said Gutfeld.

“I think I speak for the CEO of Chick-fil-A when I say Antoine Dodson is America,” said Bill Schulz.

“You can’t tell people what to do,” said comedian Bonnie McFarlane. “Like my Jewish husband –he’ll only drive German cars and only eat at the Swastika Café.”

Gutfeld said that politics is usually boring so when a controversy like this breaks out, it attracts people who are otherwise turned off by political debates, which is why this particular debate caught fire in the public imagination.