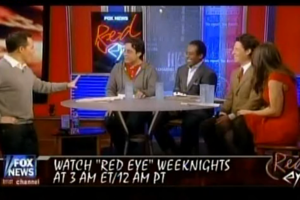 The fact that Wikileaks Editor-in-Chief Julian Assange is wanted by Interpol for a crime called “sex by surprise” seems to have taken Fox’s Red Eye panel by surprise last night/this morning, so much so that, despite palpable antipathy for the Australian hacker, Greg Gutfeld and company seemed to agree on at least one thing: “Sweden is a weird place.”

Sweden, of course, is the country that requested the Interpol alert for Assange after two women accused him of having consensual sex without a condom (well, technically, one of the ladies claims the condom broke in the process of, erm, being used. Details!). The “sex by surprise” charge seems to have taken Gutfeld by surprise as much as those ladies claim to have been.

After some expert commentary from wind-blown ducklings, it was clear his panel felt the same way. Kimberly Guilfoyle used her legal expertise to adamantly confirm that, yes, this is a crime (she calls it “communist without a condom”), because they need to find something to pin on him to catch him, whether he has committed a crime outside of the leaks or not. Even if it is a crime, Wali Collins seemed perplexed at the way legal evidence would be presented in court– how do you prove, he asked, whether a condom was used. What if it was just “expensive?” Regular Bill Schulz didn’t believe the accusations at all, and guest John Devore– who approved of the work Wikileaks had done– seemed to be skeptical of Assange’s motives based solely on the fact that “he looks like a guy who owns an iPad.” Gutfeld was slightly less delicate with his descriptions, calling Assange a “d-bag,” “jerk,” and a “worm” and noting that the one aspect of the story that “tears at my soul” is that “Assange has groupies. This guy is now considered a rock star because he leaked all this information.”

Gutfeld finally concluded that the moral of the story is that none of Wikileaks’ endeavors were about “freedom of speech… it’s about being famous,” though he wasn’t met with unison on that point. Instead, the panel vehemently agreed that, well, “Sweden is a weird place.”

The Red Eye segment via Fox News below: