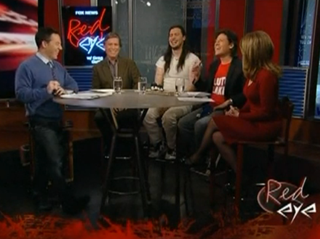 As epitomized best by the unfortunate ESPN “chink in the armor” incident last week, America’s obsession with Jeremy Lin has brought out some of the lesser informed aspects of the relationship between the mainstream media and Asian Americans, and to help, the Asian American Journalists’ Association release a guideline for how to appropriately refer to Asian newsmakers without being racist. While the Red Eye panel found some of the tips useful, there were others host Greg Gutfeld thought teetered on “giving people bad ideas.”

“Do not refer to Lin as ‘Grasshopper,'” the guide advises, and reminds reporters that there aren’t usually good reasons to juxtapose Lin with fortune cookies or take-out boxes. It also reads “Me love you Lin time: avoid.” “This is where I think they’re giving people bad ideas,” Gutfeld argued, wondering whether anyone would actually use a phrase like that. Guest Andrew WK took particular issue with the fortune cookie use (initially an ingredient in a new Ben & Jerry’s ice cream flavor), as they were American confections. He explained a little too specifically that they were made in New York, and “you could smell them from the Citiview Motel.” After a bit of speculation as to how he knew that, Bill Schulz suggested maybe fortune cookies were appropriate: “much like Lin, this is a Chinese thing made in America!”

Kurt Loder argued that he didn’t understand the Asian problem at all. “If your grandparents were born in Ireland, you aren’t Irish,” he noted, “[Lin] is an American, I don’t get it.” To Patti Ann Browne, the problem here was not racism, but sloppiness. “They are telling them to avoid lazy, tripe, sloppy, stupid jokes,” she argued, “and that is their bread and butter.” She also noted there was something uncomfortable about telling the media to treat Lin differently by avoiding these lazy jokes.

During the Halftime Report, Andy Levy weighed in with some fascinating facts on the fortune cookie: they “probably originated in 19th century Japan” and became a Chinese food item after the Japanese were locked up in camps during World War II. The fortune cookie bit of the Asian American Journalists’ Association guidelines was also the most comical to Levy. “Is there a compelling reason to [connect Lin] with fortune cookies, takeout boxes, or other imagery? in the majority of instances, no,” reads the guide, to which Levy responds, “does that mean there are occasions where there is a compelling reason?”

The segments via Fox News below: