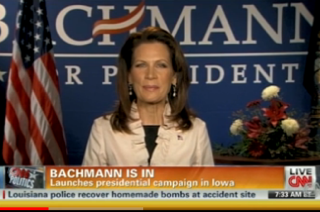 Rep. Michele Bachmann has made the conscious decision to bring her education to the forefront of her campaign. Perhaps in response to the “insulting” question Chris Wallace posed to the Congresswoman last Sunday (“Are you a flake?”), Rep. Bachmann has taken with zeal to calling herself a “serious” person, and on CNN this morning, added, “I have a strong academic scholarly background.” But as the head of a movement that routinely excoriates education, is this a wise campaign move?

Rep. Bachmann visited American Morning today to address several new minor issues her campaign has had in the past few days, including mistaking John Wayne for John Wayne Gacy and John Adams for John Quincy Adams. It appears Rep. Bachmann has had enough of being portrayed as stupid, and repeated that she is “a serious, substantive person, and I have a very strong background.” She continued, “I’m introducing myself now to the American people so that they can know that I have a strong academic scholarly background, more important I have a real life background.”

While she hedges her bets by highlighting that she considers her “real-life background” more important, she is one of the first– if not the first– of the 2012 candidates afilliated with the Tea Party to use words like “academic” and “scholarly” as positive attributes. Rep. Bachmann’s core group of supporters are self-identified Tea Party types. While the group has no leader, as Chairman of the Congressional Tea Party Caucus, Rep. Bachmann is as close to a de jure executive the decentralized, anti-spending movement has found. By highlighting her formal education, she may be tossing up red flags to her core constituency.

Those who are still playing the unfortunate Palin v. Bachmann gender trope game have highlighted the fact that Rep. Bachmann is a tax attorney with an extensive resume both pre- and post-White House bid– a far cry from the formal education that Sarah Palin can boast. But, for the most part, the people playing this game and counting Rep. Bachmann’s preparation in her favor don’t constitute Rep. Bachmann’s base. That base is one in which “strong academic scholarly background” translates to nerd, elitist, brainwashed liberal, or worse.

Note: Rep. Bachmann is not saying that she is “smart” enough to be President, or has the “common sense” and sharp mind needed for the job. Palin does this all the time, and her supporters are quick to call her “well-read” and “bright.” The Tea Party has absolutely no problem with intelligence; in fact, like every political group, they glorify it. But what Rep. Bachmann is touting has nothing to do with innate critical thinking skills or intelligence. Rep. Bachmann is flaunting her formal education– the mark that has aroused suspicion from Tea Party elements for everyone from Barack Obama to Jon Huntsman. As David Frum explained in reviewing Angelo Codevilla‘s The Ruling Class:

The dividing line between “classes” is not wealth. You can be a multi-millionaire and yet still be excluded from “the ruling class.” The dividing line is formal education, and the values and attitudes typically absorbed by highly educated people. You might almost say that the class struggle as defined by Codevilla is waged between people with more money than education, and people with more education than money.

The faction of the Tea Party that supports Rep. Bachmann (and, to a certain extent, Herman Cain)– as opposed to the one that supports Rep. Ron Paul— is one that staunchly believes President Obama’s style of politics is the only thing formal education can produce, because the wells of wisdom most voters respect as reputable academic institutions have been poisoned by shadowy manipulators like Cass Sunstein and Van Jones. Take the regular features on, for example, Big Government about Marxist influences in American colleges– stories like “People Don’t Get Educated In College,” “The Hidden Scam In Universities,” ad infinitum.

Whether the Tea Party impulse to distrust formal education so profoundly is a beneficial one to their cause is a political discussion to be had among Tea Party members themselves, but the fact is that the defining trait of the sort of Tea Party member who would support someone like Rep. Bachmann (again, it can never be stressed enough that the Tea Party is not an ideological monolith by any means). And now Rep. Bachmann has chosen to defy any potential meme that she may not be smart enough for the presidency with her formal education– distinguishing herself from Tea Party favorites like Cain and Palin, and possibly making her a marked woman for the Tea Partiers.

Rep. Bachmann’s statements via CNN below: