Paul Ryan Responds To Defense ‘Cuts’: ‘Let’s Pass A Bill To Cover The Moon With Yogurt’ 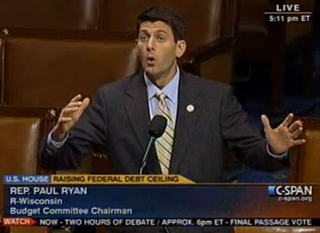 Rep. Paul Ryan took the House floor today to rail against what he considered “accounting tricks and budget gimmicks” by those attempting to carve out a budget that reduced spending. Among those, he explained, were the supposed “cuts” to defense spending that cut from predicted future spending in Iraq and Afghanistan, which he argued were not any different than repealing a bill proposing to “cover the moon with yogurt.”

Introducing to the debt crisis lexicon what is perhaps its catchiest potential meme yet, Rep. Ryan explained that much of the “spending” cuts proposed were counting money not yet necessary to spend. Many of the assumptions, Rep. Ryan explained, in the proposed cuts were, to him, complete fiction:

We assume we’re going to be fighting this war for 10 more years, with over 100,000 troops in Afghanistan and oh, gosh, wait, we’re going to withdraw our troops in 2014. $1 trillion in savings. I’ve got a better idea. Let’s pass a bill to cover the moon with yogurt that will cost $5 trillion today. and then let’s pass a bill the next day to cancel that bill. We could save $5 trillion. Wait, I’ve got a better idea. Our debt is $14 trillion. Let’s come up with a new plan to spend $14 trillion, then rescind it the next day and let’s save $14 trillion. This stuff is fiscal fantasy. You can’t make this stuff up, Mr. Speaker.

“We can’t keep spending money we can’t have,” he continued, emphasizing that the money that the proposal on the floor claimed to save was not money that anyone should expect to be spent at any time. “Why on earth do we want to give the President a blank check to keep doing that, giving our sovereignty and self-determination to other countries to loan us money to fund our government? Those days have got to end,” he concluded. The point may be a serious one of Congressional contention, but expect that “cover the moon with yogurt” analogy to take the express route into GOP talking points.

Rep. Ryan’s statements via C-SPAN below: