Reps. Bachmann and Rangel Throw Down Over Government Shutdown on Crossfire 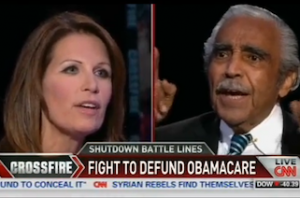 Much has been said about the controversial new hosts of CNN’s Crossfire, but they were barely visible on Thursday evening as Reps. Michele Bachmann (R-MN) and Charlie Rangel (D-NY) took over the show for a knock-down, drag-out fight over Republican attempts to defund Obamacare by threatening a government shutdown over the debt ceiling bill.

Things began cordially enough, but soon Bachmann and Rangel were going at each other with little in the way of air between their comments. Host Van Jones politely asked Bachmann if she really wants to shut down the government to prevent Obamacare from being fully implemented.

When she said that’s the “last thing” the GOP wants to do, Jones pushed a little harder. “You guys sound like my kids,” he said. “My kids are like, ‘I didn’t eat that cookie, he ate that cookie.’ I’m not trying to shut down the government, Obama’s trying to shut down the government. You have smuggled into what should be a normal bill, a continuing resolution to keep the government going, this completely other thing about Obamacare. You have got to take responsibility for that.”

But things really began to heat up when Rangel got into the mix. “She a lawyer, she’s a very good legislator,” he said of Bachmann. (“Don’t forget attractive,” Bachmann responded, an adjective Rangel said he left out for fear of being called “sexist.”) “You’re a lawyer and you’re a lawmaker and you know it is impossible to repeal a law by making it a poison pill in something that tears down the government. You know that!”

Bachmann’s big comeback to Rangel on that point was the President Bill Clinton did the same thing, to which Rangel responded, “To heck with Bill Clinton!” he said. What he was asking her is, “Is it possible at all for the Affordable Care Act to be repealed?”

“Of course it is,” Bachmann replied.

“Doesn’t it take two bodies and the president’s signature?” Rangel shot back. “What are you talking about?!”

The only way Bachmann could get Rangel to stop talking over her was to revive the sexism suggestion. “I know under no circumstances would you shut down a woman, so I’ll have my piece.”

Soon, the two members of Congress were back to screaming at each other, at times joined by Jones and co-host S.E. Cupp, who were just trying to get any word in edgewise. “One at a time!” Cupp had to interject mutitple times before cutting off the conversation to go to commercial. Now this is Crossfire.