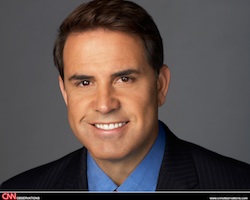 Welcome to the new world of press releases: earlier this morning, CNN anchor Rick Sanchez Tweeted out the news that he would be anchoring a new CNN show, Rick’s List.

In an email, CNN PR confirms to Mediaite that starting next month, Rick’s List will air from 3-5pm, and Situation Room will air from 5-7pm. 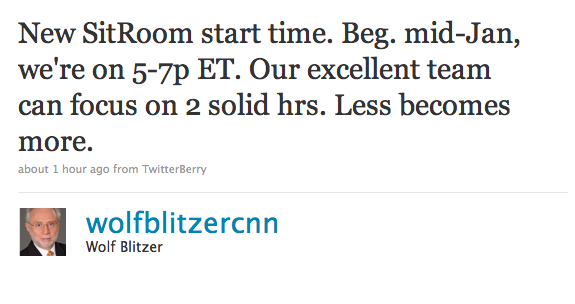 How Twitter-centric will Rick’s List be? Politico’s Michael Calderone reports that he hears that Sanchez “will be incorporating Twitter on the new show.” Sanchez is himself a bit of a Twitter fanatic, with more than 117k followers and 3,900 tweet to his name. In another tweet about Rick’s List, Sanchez took a ‘powered by you’ tack that sounds like it could have something to do with social media: “Every day “Rick’s List” will be full of newsmakers and thinkers we- and u- think are relevant to CNN. My access = your access.”

On a recent CNN Newsroom — which Sanchez currently hosts from 3 to 4 pm — Sanchez and CNN Interaction Producer Eric Kuhn did a demo of something they called “Rick’s List,” which Kuhn referred to as “a continuation of Rick’s Twitter page.” The demo made heavy use of Twitter lists (at least someone makes heavy use of Twitter lists), aggregating Tweets from celebrities and public personalities about Tiger Woods and other hot-button news topics.

As Kuhn put it at the end of the segment: “Rick’s list is not going away. We’ve unleashed a Twitter monster!”

Here’s the segment in question: