Romney Blasts Obama, Tells Leno: ‘Not A Fan Of The President’, Blames Obama For IRS Targeting 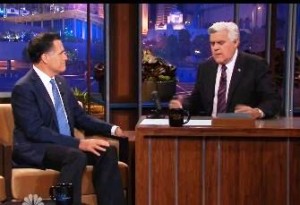 2012 Republican presidential nominee Mitt Romney appeared on The Tonight Show with Jay Leno Friday night, and took President Obama to task on the scandals engulfing his second term. Seeming quite comfortable, Romney quipped, “I’m not a fan of the President,” linking him to the IRS’s tea party political targeting, while also hitting the next potential president, former Secretary of State Hillary Clinton, for her handling of Benghazi and human rights around the world.

Right out of the gate, Romney joked about not being objective about the Obama scandals, becoming more serious when talking about the DOJ hacking into Associated Press phone calls. Romney claimed actions like this were not done under the Bush administration, and found it of “concern” anytime an administration subpoenas a large number of records from a news organization, suggesting closer inspection is required.

On the IRS scandal, Romney rested blame squarely on President Obama’s desk, pointing to the fact that the IRS reports to the Treasury Department, whom reports to the President, so “the buck stops at the President’s desk.” He concluded a special investigative counsel needs to be formed, as the Obama administration can’t “investigate themselves.” Romney generated rousing audience applause when he called for cleaning up the “breach of trust” left in the aftermath of the IRS scandal.

Revisiting the topic of Benghazi, which Romney famously went after Obama during the second Presidential Debate, Romney suggested the biggest question is why there were no efforts to rescue the American government workers in Benghazi, soliciting another audience applause with “if an American is in harms way, particularly one whose serving our country, gosh we ought to go with every effort we have to protect that individual.”

Answering Leno on whether he thought Benghazi being labeled terror right away could have changed the election result, Romney conceded that it wouldn’t have changed anything.

“I wish I’d have won, I wish I where there now…but I don’t go back and look at the election and say ‘could I have changed this or changed that.'”

Romney turned to 2016, saying if Hillary Clinton runs, there will be a careful inspection of her time running the state department, and her leadership during and after the Benghazi attack.

On one positive note, Romney complimented the President for his leadership after the Boston Marathon bombing, but ultimately quipped: