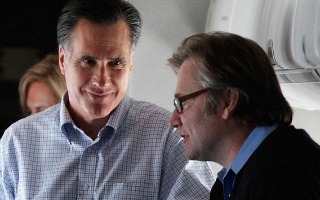 On Monday, Republican presidential candidate Mitt Romney’s senior campaign advisor Eric Fehrnstrom told MSNBC that the Romney campaign believes that the individual mandate within President Barack Obama’ health care reform law is a penalty and not a tax. In refuting the Supreme Court’s Thursday decision to uphold the law, Fehrnstrom single-handedly put the Romney campaign on the same page with House Minority Leader Nancy Pelosi. Recently, friends of Romney’s effort to retake the presidency have advised the candidate to hire some real political professionals in order to jumpstart his campaign. Romney should heed that advice and clean house – starting with Fehrnstrom.

On July 1, News Corp. CEO Rupert Murdoch tweeted that after meeting with unspecified members of Romney’s campaign team, he was not impressed.

Met Romney last week. Tough O Chicago pros will be hard to beat unless he drops old friends from team and hires some real pros. Doubtful.

Murdoch took enough heat from his criticism to again take to twitter to clarify, if not retract, his remarks.

Romney people upset at me! Of course I want him to win, save us from socialism, etc but should listen to good advice and get stuck in!

But if there was ever any doubt that Murdoch was absolutely correct, it was dispelled on Monday when Romney’s senior campaign advisor Eric Fehrnstrom appeared on MSNBC to completely undercut the potential electoral boost that the Republican presidential campaign received from the Supreme Court finding the individual mandate in the Affordable Care Act to be a tax rather than a fine.

When asked by NBC News’ political analyst Chuck Todd how the Romney campaign reacted to the Supreme Court’s decision, Fehrnstrom allowed himself to be boxed into a corner where he found himself agreeing with the White House and Congressional Democrats.

“What we put in place in Massachusetts is a penalty and [Romney] disagrees with the Court’s ruling that it is a tax,” he said.

“So he agrees with the President,” Todd followed up.

The Supreme Court has just handed Romney perhaps the most winnable argument in the modern political era – he is now able to campaign against the (correction: 10th largest tax increase in history, and single-largest in nearly 20 years) on the lower middle class in American history. What’s more, it is only selectively applied to those citizens who occupy a demographic or geographic location out of favor with the federal government.

Ranging up to over $700 per year for adults and over $300 for children, this tax is applicable to some 400,000 taxpayers below the poverty line but will be paid only by a select few who were unable to receive some exonerating status in the law or a federal waiver (according to the Congressional Budget Office). The Affordable Care Act, God’s gift to Republicans in 2010, has been made rendered even less politically toxic by the Supreme Court ahead of 2012.

And Fehrnstrom’s instincts are to unilaterally cede that advantage?

I understand that the Romney campaign is particularly wary of having a conversation on health care reform, given Romney’s having put a similar law in place when he served as the governor of Massachusetts – but I cannot believe that this is how the Romney camp wanted to frame this issue.

This is amateurism. Ferhnstrom may have done possibly irreparable damage to the Republican case that a Romney administration would lead the charge to repeal this law in total (a path favored by clear majorities or pluralities consistently since the law was passed).

In March, Fehrnstrom made a rather innocent gaffe in saying that candidates undergo a rebirth after the primary election process is complete. He likened it to the 1970s-era toy Etch-a-Sketch when the candidate’s proverbial slate is wiped clean. Partisan liberals shirked in mock revulsion over what they stretched to mean a candid admission that Romney was a man of no clear principle – but Ferhnstrom was inartfully expressing a truth that every political professional is aware of.

But this goes beyond inartful expression – this is a betrayal. The Romney campaign needs professional communicators with past presidential campaigns under their belts if they want to play this dangerous game of dancing around the health care issue.

Campaigns are often afraid to clean house lest it be construed as a sign that the campaign is floundering, erratic or rudderless. But the alternative – losing the message and ceding the high ground as Fehrnstrom did on Monday – is far worse.

Romney’s campaign should heed Murdoch’s advice. Abandoning the Supreme Court-yielded advantage is simply inexcusable. The stakes are too high for Romney’s campaign – two strikes and Fernstrom must be out; the campaign probably cannot afford a third.