Ron Paul: GOP Shouldn’t Have A Nominee Who Keeps Having To Explain Their Past Positions 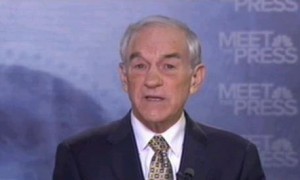 On today’s Meet the Press, presidential candidate Ron Paul appeared to react to last night’s Republican debate. David Gregory quickly recapped the quarrel at the GOP debate over which candidate is the consistent conservative. Both Mitt Romney and Newt Gingrich were criticized by Michele Bachmann for their prior support of the health care individual mandate, referring to them as “Newt-Romney.” Gregory asked Paul what he thought of his rivals’ conservative credentials.

Paul argued that both Romney and Gingrich really come from the same mold, and that the Republican party could do better than a candidate who continuously has to explain their past support of policies that the contemporary GOP does not embrace. Paul touted his own brand of consistent conservatism, admitting that no one would ever be surprised at any positions he’s taken because he’s been saying the same things for the past 30 years.

Gregory asked Paul if he truly believed Romney and Gingrich are not consistent conservatives. Paul answered in the affirmative, adding that they willingly admitted their past positions and have not adequately explain themselves. Gregory pointed out that in recent weeks, Paul has been on the offensive against Gingrich in recent weeks, but not so much against Romney. Gregory asked Paul if this meant the libertarian candidate was more open to the idea of Romney being the party nominee than Gingrich.

Paul conceded that Romney is more “diplomatic” than Gingrich at times, and Gingrich’s drive to be determined can sometimes “rub people the wrong way.” When Gregory tried to get Paul to say which of the two candidates he was more aligned with, Paul maintained that all of his rivals “support the status quo,” which makes it hard for him to give his support to any of them.