Sanders on Campaign Drama: I’m Tired of Being Beaten Up by Hillary, We’re Responding in Kind
video

Sanders on Campaign Drama: I’m Tired of Being Beaten Up by Hillary, We’re Responding in Kind 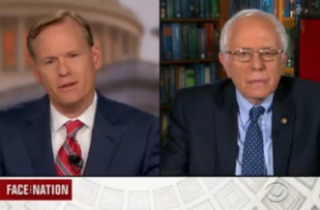 Bernie Sanders appeared on Face the Nation Sunday morning to address the increasingly fiery turn that the Democratic race has taken since the last debate. This comes after previous weeks where the two campaigns touched gloves multiple times by questioning each other’s qualifications and capacity to grow their respective bases in pursuit of the White House.

John Dickerson first asked how Sanders felt about the New York Times and other media outlets who noted that last week’s debate was the most “ferocious” one yet.

“I think that what’s happened is that I’ve become a little bit tired of being beaten up by the negativity of the Clinton campaign,” Sanders answered back, “and we are responding in kind.”

Sanders went on to say that Clinton has a habit of choosing policy positions she later comes to regret, whereas his campaign focuses on issues like holding big-money donors accountable and raising the minimum wage.

“They’ve gone after us in every single area in a way that just misrepresents my views,” Sanders said. “We had won eight out of nine caucuses and primaries, and I think they made it very clear that what their goal was.”

Sanders also fired back at Clinton’s repeated digs that he never offers specifics for his proposals, and said that with her Wall Street fundraising and legislative history, “I think you can judge a candidate based on how you raise money and who you ultimately become dependent upon.