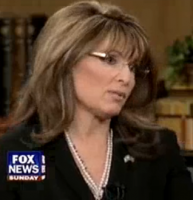 In what has already proved to be a Sarah Palin-heavy weekend, the constant candidate continued to keep her media star shining bright with an appearance with Chris Wallace on Fox News Sunday. “How hard do you think President Obama will be to defeat in 2012?” she was asked. Palin doesn’t like his chances — unless he “plays the war card,” that is.

“I got this from Buchanan, reading one of his columns the other day,” Palin explained. “Say he decided to declare war on Iran or decided to really come out and do whatever he could to support Israel — which I would like him to do, but that changes the dynamics in what we can assume is going to happen.” Wallace responded a bit incredulously, asking Palin if she was suggesting that Obama would “cynically play the war card,” to which she backpedaled a bit: “I’m not suggesting that, I’m saying if he did, things would dramatically change.”

“If he decided to toughen up and do all that he can to secure our nation and our allies, I think people would perhaps shift their thinking a little bit and decide, well, maybe he’s tougher than he is today,” she said. If we don’t rally around the flag, she said, then he’s “not going to win.”

Palin continues, speaking of the Tea Party movement as an example of the people straining to be heard. “It’s not a well-oiled, beautiful machine,” she explains, “it is the people saying please hear us.” Here’s the clip: