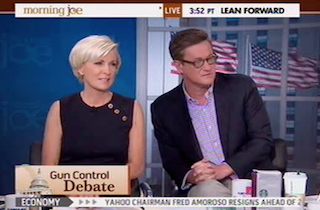 Joe Scarborough is a gun control advocate who considers himself the sane type of conservative — a point he makes clear on a nearly daily basis. Last night, Fox News host Sean Hannity, alongside guest Brent Bozell, spent a segment criticizing Scarborough for both his gun stance and self-professed conservatism. This morning, Scarborough acknowledged the critics in a rather characteristic way.

Earlier in the discussion, Scarborough followed up on the scolding he gave Sen. Heidi Heitkamp (N-ND) for her “pathetic” vote against expanded background checks. After getting off air, he recalled with an amused laugh, he got a call about the “crazy” NRA leaking a 1994 questionnaire. “The NRA went back 20 years to try to find my questionnaire — which, by the way, is very consistent with what I feel today,” he said. “I believe in Second Amendment rights and no compromise on Second Amendment rights.”

“And then last night on Fox,” Scarborough later added without naming names, “they had this entire segment that was just pushed by the NRA about how I’m a big liberal for taking Wayne LaPierre‘s stance in 1999. They’re really, really nervous.”

Donny Deutsch agreed that they should be nervous, repeating the show’s favorite 90 percent statistic, because “they will pay the ultimate price.”

Scarborough blatantly argued that he’s on the right side of the issue — which happens to be the same side most Republicans took in 1999.

“Newtown is coming. Aurora is coming,” he warned, as a guy who knows “how this story ends.”