Scarborough to The View: Republicans ‘Too Obsessed’ with ‘Hating Obama’ 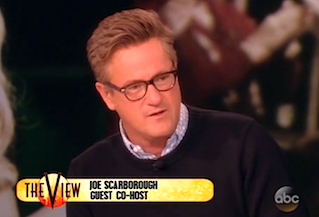 With his new book The Right Path

to promote, there was Joe Scarborough acting as guest co-host on The View Tuesday morning. And the MSNBC host had plenty to say about the current state of his Republican Party, including the belief that the GOP is “too obsessed” with “hating on” President Barack Obama.

Scarborough began by laying out the premise of his book, in which he says the GOP needs a new Ronald Reagan-esque figure to lead the party into the future. He said the real problem is that “we’ve been conducting ideological witch hunts in our party. If you don’t agree with everybody on 100% of the issues, somehow you’re out.”

As for Sen. Ted Cruz (R-TX), Scarborough said he “has the same problem Sarah Palin has. About twice as many people have an unfavorable opinion as a favorable opinion. we have to figure out how to flip that around.”

Scarborough also surprised the hosts when he said he could see himself voting for a Democrat for president. “I mean, if we keep going in this direction, you know, I would,” he said. “I haven’t had to actually try that theory out yet, and hopefully our party will turn things around.”

Finally, Scarborough weighed in on the Affordable Care Act, saying, “I’m not going to endorse Obamacare right here.” But, he added, “If you don’t like Obamacare, then guess what? Let’s actually win elections and we’re only going to win elections if we come up to an alternative to Obamacare.”