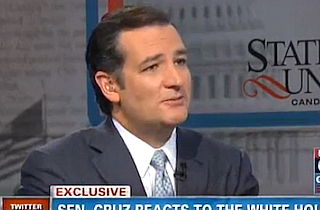 On CNN’s State of the Union Sunday morning, Senator Ted Cruz (R-TX) argued that provisions “mitigating” the Affordable Care Act should be attached to a vote to raise the debt ceiling, a sign that the Senator who helped engineer the current government shutdown over ObamaCare is willing to take the fight to the next level.

“Number one, we should look for some signifiant structural plan to reduce government spending,” Cruz said in response to host Candy Crowley’s question about what he would seek in return for the raising of the debt limit. “Number two, we should avoid new taxes. Number three, we should look for ways to mitigate the harm from ObamaCare.”

This stopped Crowley. “You think that some facet of the president’s health care plan should be attached to an increase in the debt ceiling?”

“The debt ceiling historically has been among the best leverage that Congress has to rein in the executive,” Cruz replied. “There’s great historical precedent. Since 1978 we’ve raised the debt ceiling fifty-five times. A majority of those times, twenty-eight times, Congress has attached very specific and stringent requirements, many of the most significant spending restraints, things like Gramm Rudman [i.e. the Gramm-Rudman-Hollings Balanced Budget Act], things like sequestration, came through the debt ceiling.”

“So the president’s demand, jack up the country’s credit card with no limits and no constraints, is not a reasonable one,” Cruz said.