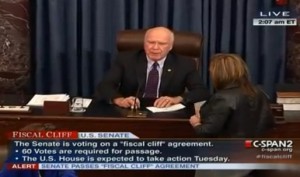 In the waning hours of 2012, it was announced that a deal had been reached in the Senate to avoid the so-called fiscal cliff, but a vote on the measure seemed unlikely. At approximately 2 am Tuesday, just hours into the new year, the U.S. Senate passed the measure by an overwhelming margin of 89 yeas, to just 8 nays. The deal, brokered with heavy involvement by Vice President Joe Biden, extends the Bush tax cuts for income below $450,000 per couple, delays the onerous “sequester cuts,” extends unemployment benefits for one year, and extends the farm bill by 9 months, among other things. The full text of the bill can be seen here.

The agreed-upon measure will extend Bush-era tax cuts for family incomes below $450,000 and individual incomes below $400,000. Clinton-era tax rates of 39.6% will be instituted for income above these thresholds. It is expected to raise $600 billion over 10 years.

The deal also includes a two-month delay on sequestration, with a 50-50 mix of spending cuts and revenue to pay for the $24 billion it will cost. Approximately half of the cuts will come from defense spending.

The estate tax rate will be 40% with the exemption limit being set at the first $5 million of income, indexed for inflation. Tax rates on capital gains and dividends will be set permanently at 20%.

The deal will also include a one-year “doc fix,” which will prevent cuts in provider payments through Medicare, but will not be financed by the Affordable Care Act. A one-year extension of the federal unemployment insurance program was also part of the package. The 2% payroll tax cut will expire.

The “Dairy Cliff” will be avoided as well, with an included 9-month partial extension of the U.S. Farm Bill to keep dairy prices from doubling.

The House of Representatives is set to consider the bill later today, and while the wide margin of passage in the Senate is encouraging, and will put pressure on House Republicans to pass the measure, it’s still touch and go. Since all of the Bush tax cuts expired at midnight, any vote for this measure would technically be a tax cut, even on the wealthiest, since even they would benefit from cuts on the first $450,000 of income. That technicality could make all the difference in the world.

Here’s video of the roll call results, from C-Span 2: