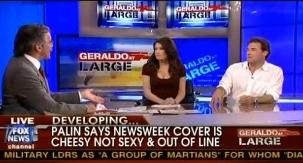 We’ve written a lot about Sarah Palin over the last week, but has anyone wondered what Mystery from The Pick-up Artist or Tucker Max thinks about her rise to media/political stardom? It may have something to do with cleavage.

Well, on Geraldo At Large this weekend we got to see what a similar author thought of Palin, the Newsweek cover and powerful women in general.

Geraldo Rivera set up the discussion with FNC contributor Kimberly Guilfoyle and Steve Santagati, author of “The Manual” (sub-head: “A True Bad Boy Explains How Men Think, Date, and Mate–and What Women Can Do to Come Out on Top”). Rivera teed up Guilfoyle with the question, “So what, she’s a babe, why is that wrong?”

“What they did was purposely try to demean her by putting on a photo that was inappropriate,” she said of the Newsweek cover.

Santagati: What difference does it make? The rules have changed. I mean look at how you’re dressed right now. You use whatever it takes to get on top.
Guilfoyle: I’m in a really nice cashmere dress.
S: You’re showing cleavage, and you’re smart.
G: But I’m not in runner’s shorts, am I?
S: It doesn’t matter, it doesn’t matter, the rules have changed. The game has changed.
Rivera: You’re showing cleavage also what are you talking about?
S: I’m showing hair, exactly. I did that purpose otherwise I wouldn’t get on the show.

More from Santagati: “Women have to realize that they can be smart, sophisticated, intelligent, whatever the case might be, and be sexy.”

This, of course, is a completely separate argument than the debate about the cover image choice made by Newsweek. As Mediaite’s Glynnis MacNicol put it last week, “I would rather the fact that Sarah Palin is such an easy target, intellectually speaking, not also function as a green light for the media to have a field day with demeaning, sexually charged coverage.”

Also, Rivera offered a brief critique of the cover story itself. “It was a piece of junk,” he said. “It was poorly written.”