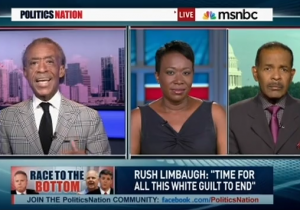 Al Sharpton tonight took notice of the increasingly heated rhetoric from Bill O’Reilly on the issue of race this week, as well as comments made by other conservative radio hosts. Sharpton wondered why they’re so “afraid of” having a real conversation about issues that affect the black community, talking about black families and black-on-black crime instead of racial inequality. Joy Reid said all the hyperbole is about riling up their audiences for ratings, because “all of these people are destroying what they see as their America.”

RELATED: Limbaugh: ‘White Guilt’ Unjustified Because Whites Have ‘Done More To End’ Slavery Than ‘Any Other Race’

Radio host Joe Madison told Sharpton conservative radio hosts are clearly afraid of “blacks, Hispanics, and women” because building a coalition of these groups as well as progressive young white men could bring about a change in political culture that terrifies them. Sharpton called it “an insult to their own listeners” by “ducking and avoiding” real issues.

Sharpton showed a clip of O’Reilly blaming problems in the black community on issues in the black family. Sharpton fired back against claims there is no emphasis on issues like that or black-on-black crime from civil rights leaders, citing an example of the latter that he talked about on his show. He declared that “they will not deal with the question of inequality” and will talk about anything related to race except for “racial injustice and profiling.”

Reid drew a distinction between black talk radio, which she said is like a conversation between the host and the audience, and “right-wing radio world,” where it’s all about a “personality cult” of “white grievance.”

“All of these people are destroying what they see as their America, and that siege bunker mentality is great for ratings because it keeps people on edge, angry, and feeling like they need to hear from their guru every day. So it’s all done for ratings, but it doesn’t deal with real problems.”

Sharpton remarked that it’s “very telling” how they’re not addressing other important racial issues while going out of their way to highlight the others.